Boy, what a difference in just one day. The same day Central Texas was being pummeled with flash floods and tornado warnings last May we were about 200 miles away at Anahuac National Wildlife Refuge birding by car under somewhat blue skies with enough cloud cover to keep things cool. We had no idea later in the day as we returned to Austin that we’d be driving right into the rains and a forming tornado that thankfully never touched down.

Instead, we drove around the refuge with only the sound of our tires crackling the gravel beneath us and the calls of birds. There weren’t many folks around. Just the occasional truck that passed us by, loaded with fishing gear, with passengers hoping to catch something from the Galveston Bay estuary.

This was the end of May. Migration is technically over and birders in the south are recovering from their steadfast searches for birds making their way north. We’re late to the party because we just moved here and missed migration. But it’s nesting season and there are plenty of cute young birds to observe like we did the day before at the Smith Oaks Sanctuary on High Island. And there are still late comers to migration that shouldn’t be missed. My heart always jumps a little when I see a bird who is behind the pack, whether it is by intention in timing or he just got a late start.

It’s what you do after a long flight

Nighthawks have been a new bird for me here in Texas. I’ve heard them and seen them overhead as they come out at sunset when I’d leave the grocery store, but I never got a good look at one until this day at Anahuac where we saw around 25. These are part of the late-migrant contingent, having just arrived from their flight over the Gulf of Mexico. Clearly, they were exhausted. We’d see them, each settled in on a post. And then another. And another.

And then there was this one who kept alighting in front of our car and planted himself in the gravel, supposedly trying to keep us from moving. Then he’d fly up low and go 5 yards further then plant himself into the gravel again. He did this for about a quarter mile then figured we weren’t going away and moved over to the side of the road. 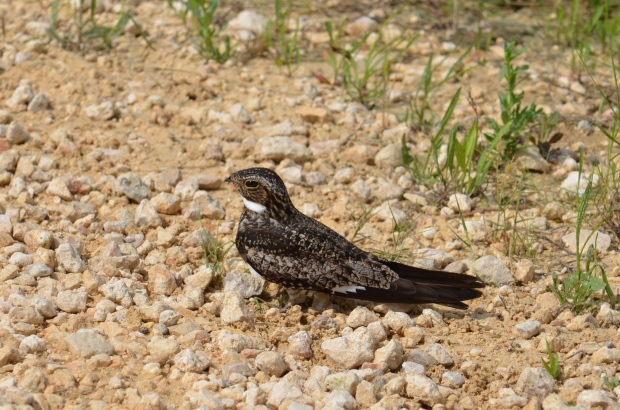 Don’t bother looking under “Raptors” in your field guide. You’re not going to find Nighthawks there. Instead, look under “Goatsuckers” (and in Europe they’re also referred to as Nightjars), which consists of nocturnal insect eaters and birds with flat heads and big mouths. These nocturnal birds were seen in fields with goats and so it was thought that, with their frog-like mouths, they were born to suck on the teats of goats. Naming birds isn’t all that scientific I’ve found.

His mouth reminds me of the Potoo—big and wide—and as you can see here, looking straight on, shaped a bit like a handlebar mustache. Imagine flying around with that mouth open and you can catch a lot of bugs that way. It reminds me of the big Manta Rays we’d see when diving where they open their big mouths to scoop up plankton. 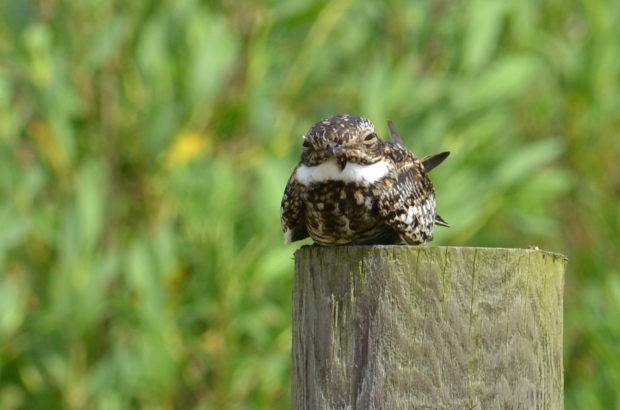 Speaking of weird names in birding

Sure, it was quiet on this late May day, but that was part of the joy in finding a few new birds for me. Including the giggle-inducing name Dickcissel (which is named after its call probably by someone really smart and not an immature middle schooler).

And here’s the female (as you can see she doesn’t have the black throat of her male partner).

Look, I know a lot of Texans are annoyed with Grackles. When I first moved here I’d speak of birding to my new coworkers and most everyone would immediately go to talking about the bird they hated the most (Grackles) and speak of them with such disdain. I know, they seem to be everywhere. But I love them. They walk around the grocery story parking lots like a model on a cat walk, strutting their elegant long legs, swaying their long broad tail behind them, usually with their beaks pointed toward the sky, as if snubbing me while they plotted how they were going to poop on my car when I go in to the grocery store. Yeah, the poop is annoying, but they’re elegant birds. Austin has mostly Great-tailed Grackles, but here at Anahuac we found a bounty of Boat-tailed Grackles. Here he’s hanging out with a Red-winged Blackbird.