First there were about 50 birds up in the sky circling overhead. Then another group came in—this time a hundred or so. It was still pretty light outside. Then bigger groups of Purple Martins were circling as if caught in a blender. The more the sun set and dusk began to settle into to night, there was an exponential growth in Purple Martins filling the sky.

I leaned back in my chair with my face up to the medium blue sky and I felt as though I was looking down at the ocean into a sea filled by a large school of thousands of fish. It was dizzying but thrilling to be surrounded by the frenzy in the sky. Birds would swarm together then break up then all swoop into the few trees surrounding the Chase Bank building and I wondered how there could possibly be enough limbs to hold each of them. And then as if signaling to each other that they’re not quite ready to settle down for the night they lifted up and spread out over the sky and then settled into swarms that formed more somewhat organized groups to circle overhead. 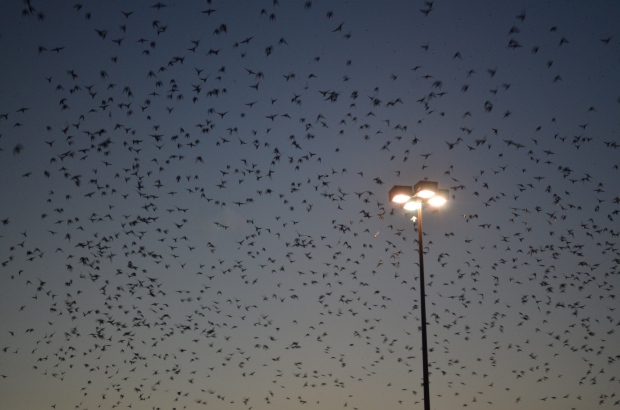 Where to see this

You hear all about the bats here in Austin, but if you’re really in the know, you’ll be at the Purple Martin parties. They’re free. All you need to do is show up at the parking lot at Capital Plaza Shopping Center at 5451 N Interstate 35 Frontage Road in Austin.

Bring your lawn chair, something refreshing to drink and a hat because there can be a lot of poop. You won’t need your binoculars to see the spectacle, but there are some party crashers like the Nighthawk and Western Kingbird you might want to get a good look at. What you should bring is your video camera. A good smart phone will do the trick.

There are approximately 350,000 – 400,000 Purple Martins the Travis Audubon volunteer told me. (They’re kind of hard to count.) They are roosting in these trees next to the Chase Bank building for a few weeks, as a stopover during their migration beginning from as far north as Alberta, Canada and ending in their winter homes in the Amazon. So yes, it’s July and Fall migration has already begun. (Actually, shorebirds started the “Fall migration” in June.)

Purple Martins will take about two weeks for the Spring migration (for instance from Brazil to Alberta) and take four months for their return trip. Spring is the mad rush to get to the nesting site, while Fall provides more of a leisurely commute back to Brazil.

So don’t put it off. There is one more weekend for the “party,” though you can still take a look by dropping by the parking lot anytime during the week if you can’t make it Friday or Saturday. But hurry, they’ve still got a long ways to Brazil so they won’t hang around Austin for too long.

Still not convinced? Here’s some footage (about 30 seconds) I shot with my DSLR. Click the play button to watch.