NO ONE misses the Birds of Paz de las Aves in Ecuador. Well, except me.

It was way too steep for me to get down to the feeders at the Paz de las Aves Bird Refuge in Ecuador. It’s a bit of a hike–about 1000 meters–and mostly downhill, which was a huge challenge for me. That’s why Jose, our guide at Tropical Birding, gave me the option to wait at the top of the trail where there were about six hummingbird feeders.  (And where I soon found myself being dive bombed by some angry hummingbirds.)

So off went Steve and Jose, along with Bill, who was also on our tour. Oh how I wish I could have gone. Though it had been two years since I had broken my leg on a trail at Zion National Park, Utah, my confidence level had been low during this trip to Ecuador. I spent the entire two weeks terrified out of my mind that I would slip and fall again so I was content to look at lovely hummingbirds and rely on Steve’s trip report, which I’ll pass along to you in this post.

At the end of the trail there were a variety of feeding stations to attract the antpittas as well as other birds. Bananas, papaya, orange slices and pineapple were on the menu that morning and after several minutes the birds began to appear. 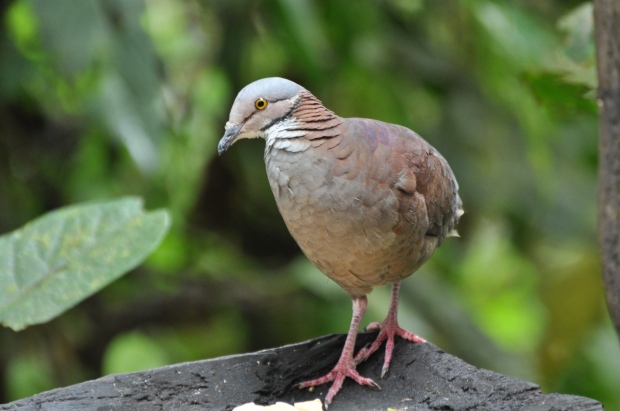 The real star that they were hoping to pop in was a no show. They were hoping for an appearance by Maria, a Giant Antpitta who hadn’t been seen in several months. (Foul play is suspected. What a shame.) 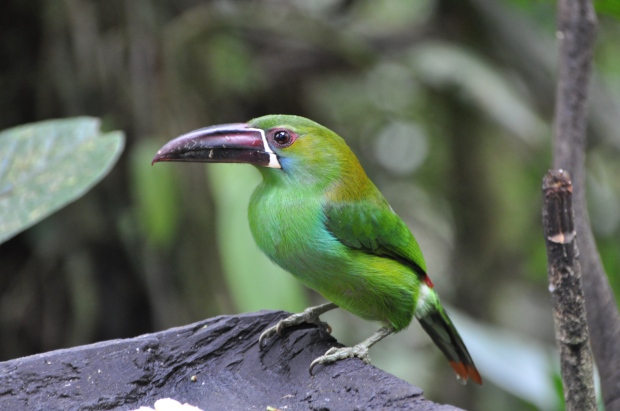 Another no-show was the highly anticipated Ocelllated Tapaculo. Though when the field guide says “often heard, but seldom seen,” one really shouldn’t get his or her hopes up. Though Steve, Bill and Jose reported fleeting glimpses of it. I guess that counts, right?

They didn’t see the Andean Cock-of-the-Rock on this trip–we got there too late.  Ideally, you should arrive by 5:00 a.m. to see this stunning red-headed bird, but we arrived at 6:00 a.m. knowing we would miss it. (Our late arrival wasn’t an accident. We discussed it as a group the night before and opted to get an extra hour of sleep, which I realize most birders wouldn’t admit to.)

But don’t fret, we did see the Andean Cock-of-the-Rock a few days prior as we were driving near Yanacocha Reserve. We stopped at a place where Jose knew it would be and we searched with our binoculars. And there he was–all red, white and black, sitting in a tree. (I get the credit for finding him, I might add. I might suck at ID’ing birds but I’m pretty damn good at finding them. Just wish I had a bigger lens.) 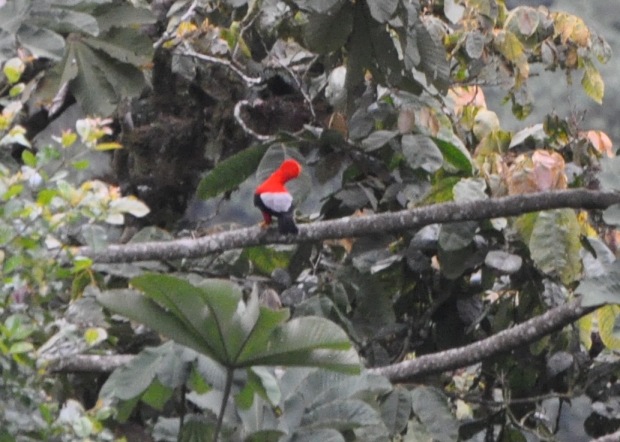 So yeah, I didn’t get to see all the birds at Paz de las Aves. Of course I was kind of bummed about that, but I eventually found an okay place in my heart about the whole thing. So hey, maybe next time. (Pretending that we’re going to go back is also an okay thing to do.)

But we’re not done yet. One more bird to highlight here. After we left Paz de las Aves we birded from the road a bit and found this cute fella showing off for us:

16 thoughts on “NO ONE misses the Birds of Paz de las Aves in Ecuador. Well, except me.”