What to do about that ginormous Birds of Ecuador field guide

I already spend enough time in physical therapy. The last thing I needed to do was carry around this big tome around Ecuador. 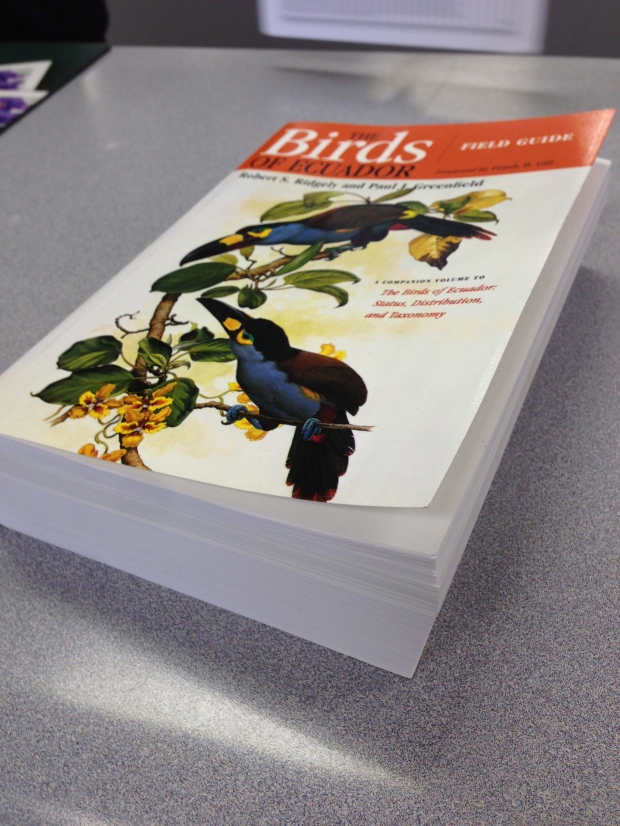 Here, let me give you an idea of really how big the Birds of Ecuador Field Guide is: TWO INCHES THICK.

You can find it online, as two books, which makes it easier to haul around, but it’s rather pricey to do it that way, or you can do what we did, which was just take it to FedEx Kinkos and have them slice off the spine and break it into two. Easy peasy.

Because the plates are organized separately from the detailed text it made for an easy split. (Normally I like all the relevant text near the bird illustrations, but in this case it worked out perfectly.) We carried the plates —the smaller portion you see on the right of the picture above—with us when we were in Ecuador, and we took along the the other half —the descriptions and text—but kept it in the lodge in case we needed to refer to it later. (By “we” I mean Steve, because I’m only accidental. Steve is much more obsessed with reading the text and all the descriptions.)

But I’m the techno nerd

Just after the Birds of Ecuador field guide arrived in the mail (and before some friends advised us to chop it into two) I sent out a tweet on Twitter lamenting about how heavy the thing was. Because I used “#birding” in my tweet, Sharon Stiteler of @BirdChick responded almost immediately with a tweet recommending that I look into the Birds of Ecuador iPad app ($9.99 via Apple’s App Store) by Worldwide Zoom. (This is why I adore Twitter, guys.) It is beautiful and also has a version just for hummingbirds. ($4.99) Plus, I’m all about technology and gadgets so this thrilled me. Neither apps are comprehensive, nor are they considered a field guide, but  they’re each a lovely thing to study when you’re back at the lodge or on the airplane on the way to Ecuador and they won’t add to your physical therapy bill.

Do you have favorite resources, field guides, apps you use for birding? 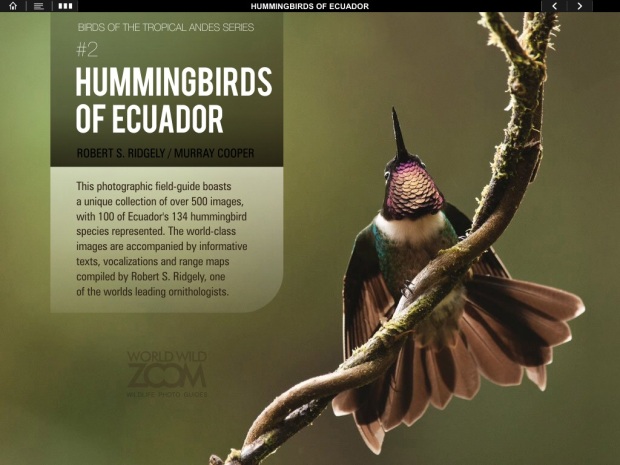 ← When birds make me complain-y
NO ONE misses the Birds of Paz de las Aves in Ecuador. Well, except me. →