This is how I ended up becoming a birder

When I was a little girl my mother gave me a sticker book for my birthday that was all about birds. I don’t remember much about it except the Chickadee. I learned that it flew up and down like it was on a roller coaster. That’s all. I can’t remember anything else from that book, except that it was interesting to match stickers of birds with the descriptions.

Fast forward about 35 years or so and I met this man who would later become my husband:

He was a bit sneaky about his love for birding. We had met online and all that time we were emailing before we met in person, he didn’t share one lick of information about his birding. When I finally met him in person in Scotland, of all places (he’s actually Canadian but was over in Scotland at the time), it wasn’t until the third day of our road trip through the Scottish Highlands that he stopped the car at a bird sanctuary and pulled out his scope and tripod from the trunk of the car. That’s when it hit me: This guy is crazy about birds. (You can read the full story at my other blog here: Romance Blossoms in the Scottish Highlands. I warn you, though. It’s a little mushy, and for that reason, not one of Steve’s favorite posts.)

Eight months later (still dating long distance) we spent our first Christmas together in Utah where Steve said, “I know what I’m getting you for Christmas.”

Super! I thought. I was convinced it was going to come in a blue Tiffany box, as every girl dreams of jewelry or something very romantic, and then he said: “Birdfeeders!”

We went to the Wild Bird store and picked out a variety of feeders while he explained to me simple details of each. We bought the seeds together and he schooled me in suet, niger (thistle) seed, and sunflower seeds. The whole process of doing this together actually piqued my interest. (Or maybe I was so smitten I simply didn’t care.) He also bought me my first field guide: The Golden Books Birds of North America field guide.

“You’ve got a great variety of bird life here,” Steve told me.

“Really? I never noticed,” I told him, and then I felt a little ashamed, thinking for certain the relationship was now over.

My first bird feeders in the spring

Then it happened. All of a sudden I noticed all the birds in my backyard. In fact, they were all over the place. “Had they always been here?” I thought. I know my neighbors just on the other side of our fence had feeders (they’re also pretty serious birders), but still I didn’t notice all the birds until I had my own feeders. I soon found myself wanting to sit at the kitchen table for hours as I watched all the bird life in my backyard.

The birds have changed my life more than just noticing new visitors to my backyard. The idea of starting my day looking out the window as I eat breakfast is an extraordinarily wonderful way to start my day before I head to the office where the stress is undeniable. I also soon found myself looking at what birds are around when I come home (if there’s daylight when I come home). In fact, one day I found over 10 Lazuli Buntings in a tree, all queued up to take their turns at the feeders. I had never seen the beautiful bird before and I hurriedly phoned Steve who was in Calgary, Alberta at the time and described the bird so he could tell me what it was (which he did–I wasn’t confident at using my field guide yet).

It is now a treat to look for these migrating Buntings every Spring for the few weeks they hang out in my backyard before they make it to their temporary canyon homes for the summer. It’s weird that I lived here in this home for four years and hardly noticed the birds. It makes me wonder how many other spectacular things in life I’ve missed.

You marry a birder, you become a birder

I married that guy I met online who waited until he was certain I liked him before he told me about his passion for birding. (“It’s not the first thing you tell girls,” he told me later.) In fact, for a wedding gift, he gave me my first pair of binoculars and our honeymoon to the Yucatan was a birding adventure with bird guides set up in three different locations in that part of Mexico. 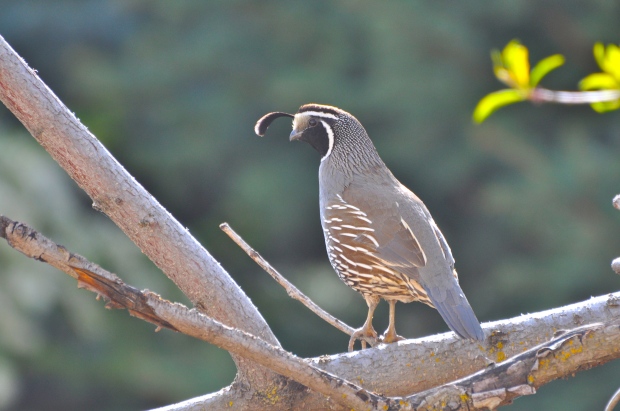 The California Quail are some of the most interesting birds to watch in our backyard.

Is it just us, or do you give your backyard birds names? Our favorite is Harry the Black-chinned Hummingbird. This guy totally rules the territory around my backyard, fighting off other hummers from the feeder so we had to get two hummingbird feeders. He’s completely bossy but we know he returns each year to our backyard. (Well him, or one of his offspring.)

Black-chinned Hummingbird (This is “Harry”)

In the gallery below there are more photos of the birds from my backyard. There’s a lot missing, such as the American Robin, Starling, Magpies (noisy but extraordinarily beautiful), Pine Siskins that are so tame that Steve can approach them, “Cooper” the sometimes resident Cooper Hawk who has been known to ambush the birds in the backyard (which totally freaks me out every time), Mourning Doves, House Sparrows, Song Sparrows, and the occasional migrants, like the Rufous Hummingbird who’s been at the feeders this week. There’s also the House Finch, American Goldfinch, Northern Flicker, Dark-eyed Junco, the jaunty Spotted Towhee and Downy Woodpecker. (I know I’m missing more.)

Oh yes, the Chickadee. We have a family of Black-capped Chickadees in the backyard too.

Click on a photo and it will take you to the slideshow for better viewing.

Black-chinned Hummingbird (This is “Harry”)

This Black-headed Grosbeak was singing his heart out in the rain for quite a long period. I was completely fascinated that he didn’t mind the rain, nor did he mind that I was taking his photo. Not as skittish as the other birds.

I get it that the Brown-headed Cowbird is a nest parasite. But I love, love, love the gulp-gulp-gleeee song. It’s so interesting. Fortunately, we don’t get many Cowbirds in the backyard.

The California Quail are some of the most interesting birds to watch in our backyard.

We like to call this Scrub Jay “Blue.” Actually, our neighbors came up with the name. Loves peanuts!

I was so excited when I spotted this Western Tanager as I was looking out our laundry room window. He was flitting about in the trees across the irrigation canal behind our house. It’s the only time I’ve seen him. (It’s hard when you’re at the office all day.)

← Naked Germans and screaming monkeys make birding in Tikal exciting!
This is what Antelope Island looks like in October →