During World War II when the US had control of the Panama Canal the US stored ammunition in bunkers to protect the canal from the Japanese. It was in this military zone (called the Canal Zone), which is about 10 miles on both sides of the canal, where they dug a bunch of ponds in the area so they would have easy access to water in case of fire.

The US has since left, but the ponds are still there, providing a small wetland on the outskirts of Gamboa and making birding very easy and accessible.

This was not our first time to the Ammo Dump Ponds. We visited here back in 2012 during our first visit to Panama, but that morning had been rainy. This day? It was looking to be glorious. The first bird to greet us was this lone juvenile Wattled Jacana, wandering around the wet grass that still had drops from the morning’s dew. He didn’t seem to mind that we pulled over, hauled out our tripods, scope, camera and binoculars, setting out to see what we could find. He clearly had breakfast on his mind during his walkabout. 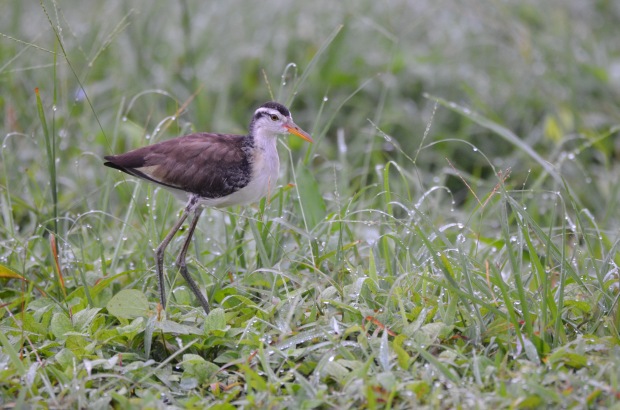 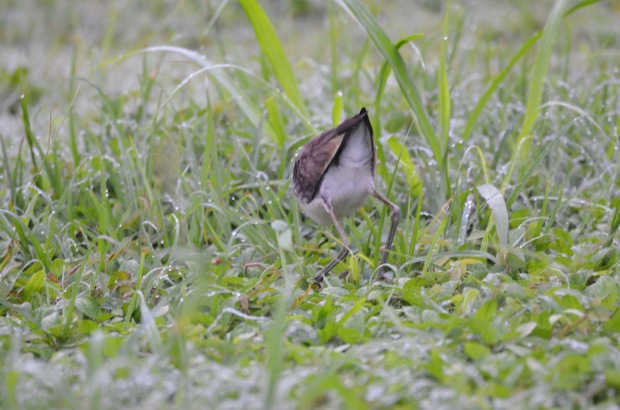 These two adult Wattled Jacana were nearby, but clearly giving Junior his space. I have always adored Jacanas. 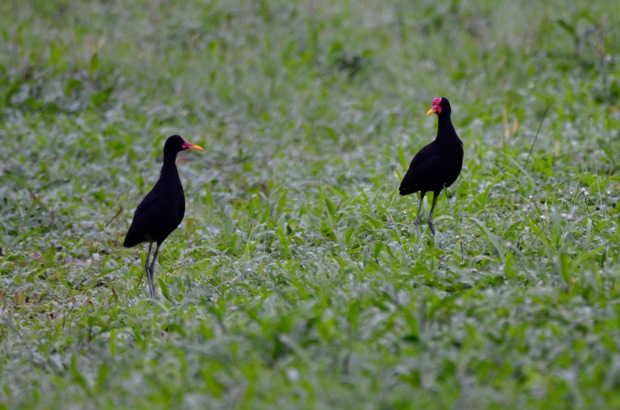 Wattled Jacana “Have you seen him?” “No, haven’t seen him.”

There were about 5 or 6 Collared Aricari eating the fruits in a nearby tree, paying no attention to us. They’re part of the Toucan family and it seems we were lucky this trip to see so many.

My smart husband, Steve, pointed out the Kingfisher nest holes in a nearby road cut. They’re about four feet deep and shared by a single pair and they dig a new burrow every year, which is why you see a bunch of holes here. 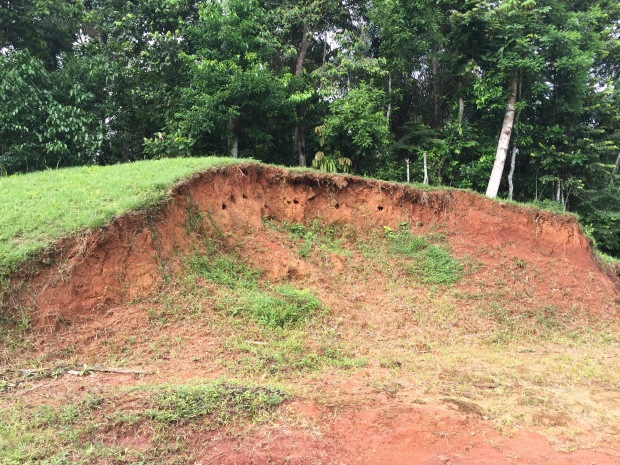 The winner for this morning’s most cooperative bird goes to this Rufescent Tiger Heron. I must have taken over 100 photos of this guy as he hunted in the ponds for frogs and snails and anything else he can catch and swallow. 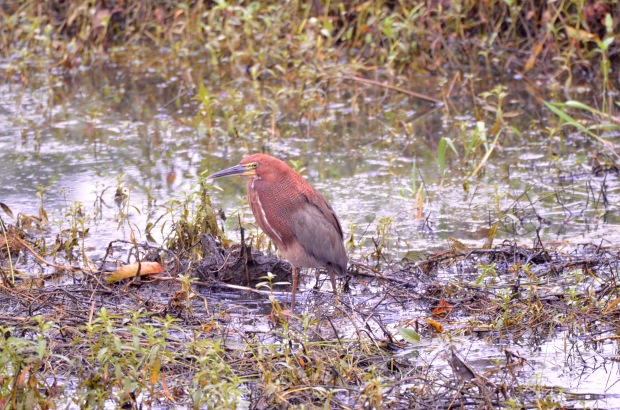 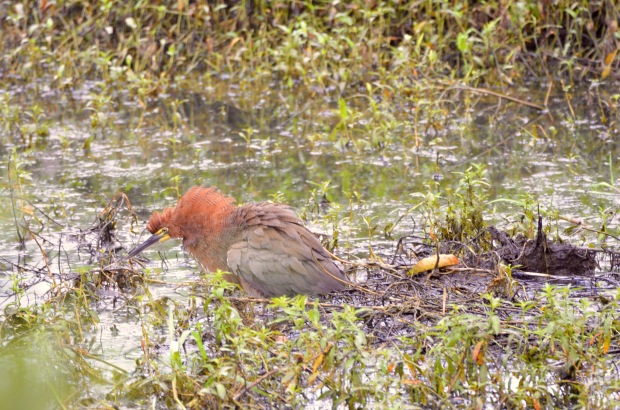 Our guide, Beny Wilson, found a Striated Heron sitting on a nest way back behind the Rufescent Tiger Heron. (Honestly, I don’t know how he finds these things. He can find a needle in a haystack, I swear.) 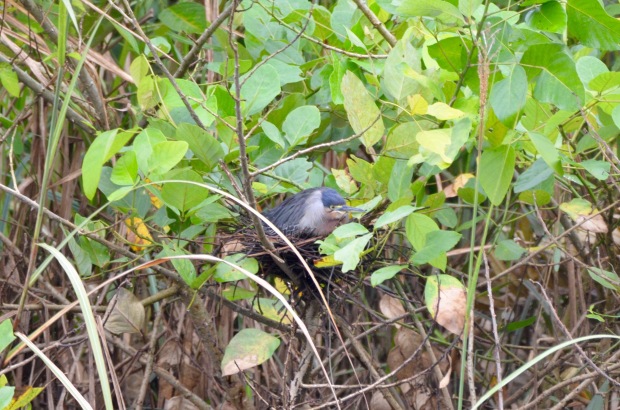 Striated Heron on the nest

Since we’re on a heron theme right now, check out this Green Heron who was also hanging around and giving me the eye. 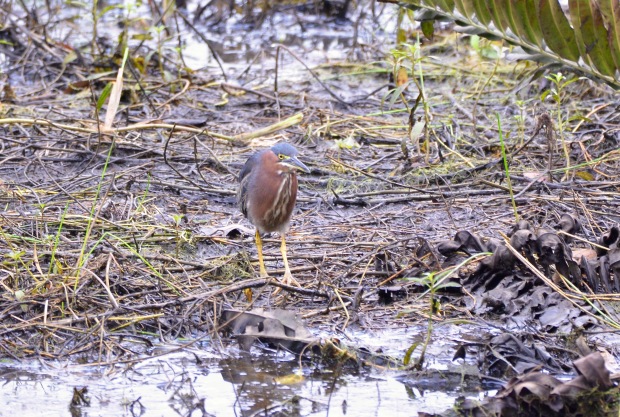 And certainly a nice qualifier for our 2017 calendar is this pair of Rusty-margined Flycatchers. (I make Steve and calendar each year of our favorite birds from our trips.) You can’t see their rusty margins very well here. If you’d like to get a good luck at those rusty margins, my post from a few days ago has a nice snap of a bird showing off his margins quite nicely. 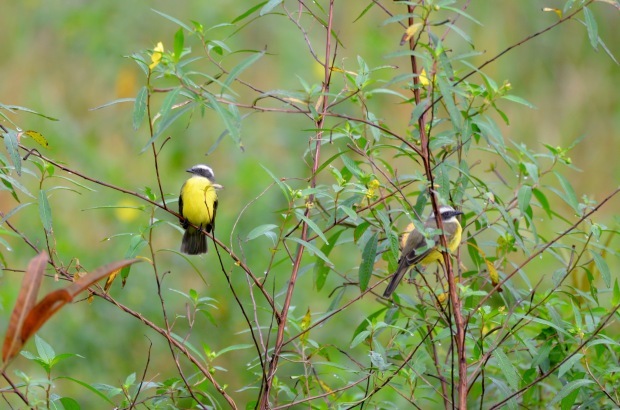 I’ve seen this next guy—the Crimson-crested Woodpecker—before, but I’ve never been able to get a decent photo of one. I’d say this new lens I’m using is certainly getting better snaps. 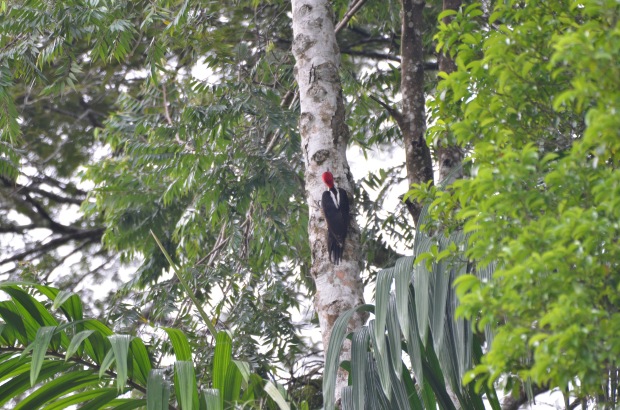 And this Isthmian Wren was curious about what we were up to, which was okay by us because he was a lifer. 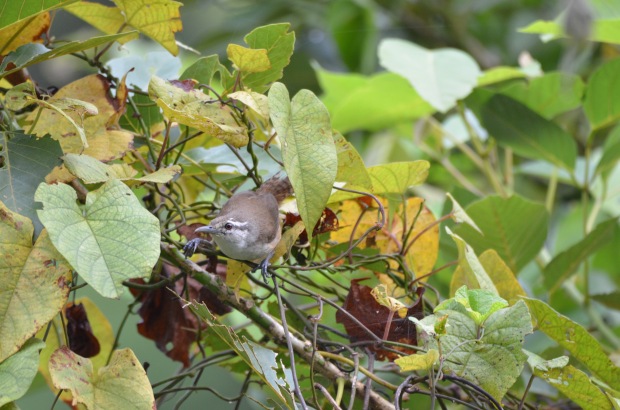 Right as we were leaving the ponds to head to Pipeline Road we saw a family of Gray-cowled Wood Rails foraging. They are a “new” species because they split from the Gray-necked Wood Rail (which we saw in Belize and Guatemala). There were two adults and three juveniles. This was such a treat finding them as Wood Rails are not easy to find. Plus, it was a lifer for us now that it’s been split. 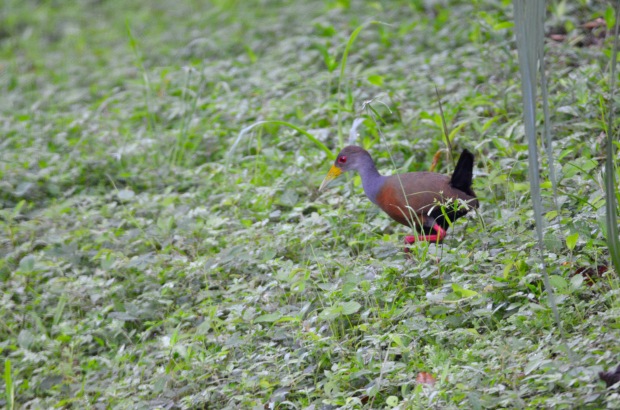 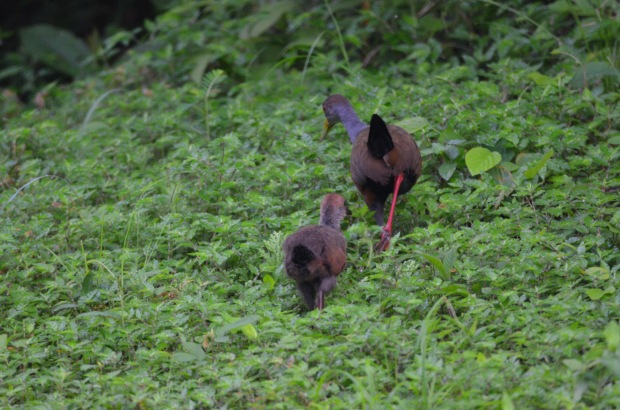 If you ever go to Panama to go birding promise me you’ll swing by the Ammo Dump Ponds. It makes for very easy birding and there is lots to see. When we move to Panama I’ve decided I’m going to just hang out at the Ammo Dump Ponds. You’ll see me in one of those canvas camp chairs with the cup holder, which will probably have a Diet Coke in it. It’s the perfect place to see so much. 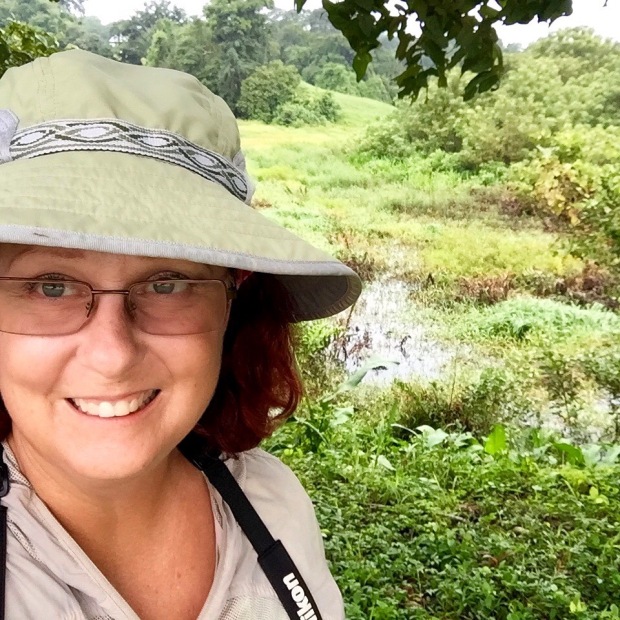 Who wouldn’t want to spend all day looking at this?

Next post is going to be about a great find at the Ammo Dump Ponds. So great, it deserves its own post. But in the meantime, enjoy the list from our visit to the ponds.

We got 59 birds and we were just getting started. (lifers in bold)

← All alone in Panama
Something better →