Partly cloudy with no chance of showers

We fly out of bed. There’s no time to shower. (Sorry all you people we had to sit next to on the bus.) Thank goodness I had laid out my clothes the night before like a school girl before the first day of middle school. I threw my clothes on, brushed my teeth, and threw some fruit, granola bars and a bottle of water into our lunch bags.

We had this all planned out so this wouldn’t happen. Really.

“Let’s make sure we’re at the place where the busses pick us up by 5:30,” Steve instructed me last night. “Birders don’t like it when people are late.”

He’s right. They’re ready to go and they wait for no one. There’s nothing worse than the stare down and scowl from people in their Columbia or North Face long sleeve olive-green shirts and convertible khaki cargo pants.

This is the first morning of the Rio Grande Valley Birding Festival—one of the largest bird festivals in North America and takes place in Harlingen (hard “g”), Texas. It was a long seven-hour drive here from Austin as it’s clear down at the south end of Texas. It’s subtropical here in Harlingen and feels an awful lot like Miami. Warm breezes, high humidity and palm trees. It’s at this festival where you can find a lot of southern Texas specialties—that is, native bird species that can only be found in South Texas.

We made our bus and it was still dark as it pulled away from the Festival headquarters. We were headed to the 825,000 acre King Ranch, which is one of the largest working ranches in the world. (To give you an idea of how large it is, that’s larger than the state of Rhode Island as both the festival guide and the King Ranch website point out.)

We file out of the bus and begin our walk about the ranch and thankfully it wasn’t too hot. The clouds and occasional breezes kept us from dripping, which was good since, well, you know, we hadn’t showered. Our first order of business was to find the Ferruginous Pygmy-Owl. We’ve seen this guy before (in Mexico on our honeymoon), but we hadn’t seen it in the U.S. and most of the folks on our field trip hadn’t ever seen it. But it requires patience.

The above picture is everyone hearing the Ferruginous Pygmy-Owl, but it’s just not coming out. We waited and waited as good birders do, and then finally, he appeared and everyone got good looks at him.

And here’s what it looks like when you duct tape your pants to keep the spiney burrs off of you.

But, let’s be honest, who cares what we look like because we didn’t even take showers today.

Favorite bird of the day? Why, that would be the gorgeous Green Jay. 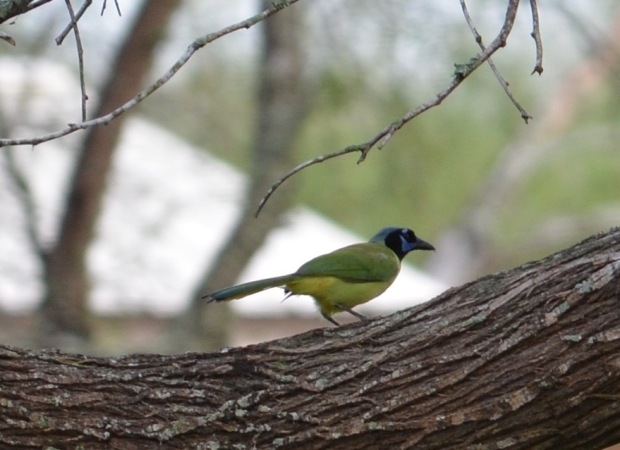 Second-place favorite bird was the Golden-fronted Woodpecker because he gave me great views.

Favorite birders of the day? Well, this cute couple from California. 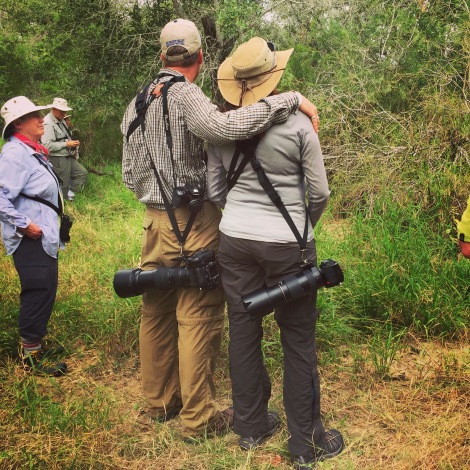 After the field trip we caught the lecture on I.D.ing Shorebirds by Kevin Karlson. It was a fantastic lecture where Karlson explained how to identify by impression. It got me excited about shorebirds, in particular, peeps, where I really have no idea how to tell one from another. I usually just rely on Steve to tell me what I’m looking at, and most of the time I just play along until I get home and look at my photos and then get Steve to tell me all over again. I picked up Karlson’s book and chatted with him afterward. I realized that I was on a field trip a couple of years ago at the Great Salt Lake Bird Festival where he was with my group, so we chatted a bit about Bear River NWR.

I’m excited to dive into this book.

Now, time for that shower, but before I go, you’ll find today’s list of birds we saw at King Ranch below my braggy 50 Bird Day Badge. (Lifers in bold) 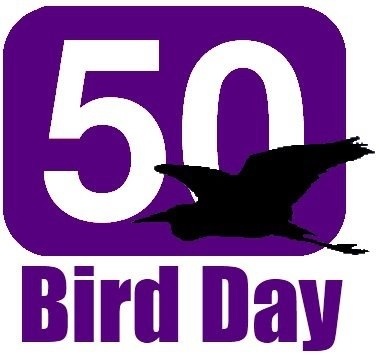 6 thoughts on “Partly cloudy with no chance of showers”