The first time I went to Hawaii with my husband, Steve (the true birder in the family), I thought we’d see loads of fantastic birds. Why wouldn’t we? It’s warm and tropical and usually when we go to warm and tropical places (ala Mexico, Belize, Panama) we see many varied and colorful bird species. “Not so with Hawaii,” Steve said in preparing me for the trip.  “About 75% of the native Hawaiian bird species are extinct.”

So we went, scuba dived and saw a couple of birds. It wasn’t a birding trip. I didn’t even try to look for birds.

Before our recent trip back to Hawaii, someone on Twitter wrote me, “Hope you see lots of birds!” to which I thought “That’s not going to happen,” feeling a little bummed that Hawaii’s not a very birdy place. (Yes, the great irony is that there are worse things to feel bad about, and going to Hawaii should never be one of them, I realize.)

But this time around it was different. Why not try to find some interesting birds still?  Without doing any hard-core birding (the get-up-around-dawn kind of birding with a local guide) we were able to spot  24 bird species with nine of them being lifers (see in bold below in the list) during our four days on the island of O’ahu. The Pacific Golden Plover seemed to be everywhere, as he was wintering in Hawaii. (See my previous post, Aloha to the Pacific Golden Plover.)

A good place for spotting birds is the Waimea Arboretum and Botanical Gardens found on the North Shore of O’ahu. We had arrived an hour before closing and had we been able to spend more time there, I’m certain we would have spotted even more birds. 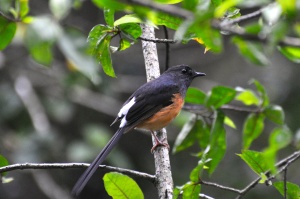 Yes, my list isn’t very long. And you’ll noticed the list is predominantly  introduced species not native to Hawaii. Aside from the Rock Dove, House Finch,  House Sparrow, mallard, Stilt and Rooster, the birds in my list are not birds I would find where I live. A little bummed that my list isn’t longer? Of course. Annoyed that 75% of the Hawaiian native species are extinct? Yes, definitely. But going to Hawaii and seeing birds I normally don’t see everyday is exciting.  It gives you a sense of place—that you’re somewhere different. And isn’t that what travel is all about?

I’m trying to think about how we get people to care about the birds of Hawaii. Even the American Birding Association (ABA) had a survey earlier this year asking its members if Hawaii should be added to the ABA area. (See George Armistead’s blog on the ABA site for his Top 10 Reasons to make Hawaii part of the ABA.) My feeling is that Hawaii should be added. If not for the reason to help locals as well as visitors to the island appreciate the importance of birds.

Check out the gallery to see more of the birds we saw on O’ahu, plus a turtle and a waterfall (just to mix it up a little.) Click on any photo below and it will take to you a lovely gallery for better viewing.

← A date, a smelly lake and a pair of binoculars changed my world.
A Last Day at Antelope Island →