Birds and the Bees

I couldn’t really escape. There I was at the top of the 100ft /32m high tower being swarmed by angry bees. Nevermind that there were eight other people up on the tower–the bees weren’t even bothering them. Noooooooo, they were swarming me and the more I heard the buzzing the more anxious I became.

“It’s your shirt,” Steve said. “They think you’re a big flower.” The shirt he was speaking of just happened to be the same bright coral and orange shirt I wore a few years earlier on the same tower at Pipeline Road in Soberanía National Park.

Apprently I look like a flower. This was back in 2012 during our first visit to the tower at Panama Rainforest Discovery Center on Pipeline Road. But no bees were around then.

This is the same tower that’s accessed through the Panama Rainforest Discovery Center, and featured in last week’s episode of The Amazing Race. It was cool to see a place we’ve been to featured on the popular TV show, but it’s too bad they were calling it by the wrong name. The contestants/racers kept calling it Canopy Tower, which is a different place entirely. Regardless, it didn’t look like bees were bothering any of the racers on the TV show.

There’s very little that will ruin a day of birding for me. Not mud. Not rain. Not even coming up empty or short where finding birds is concerned. But bees? Bees will freak me out every time.

The buzzing around my head terrorizes me. One time an angry bee got stuck in my massive, curly, frizzy, untamed hair and stung me. I can understand why he’d be pissed. My hair isn’t easy to deal with, so getting lost in it would be maddening. And I’ve been stung on my forehead by a maniacal wasp that chased after me. Then there was that time my sister, brother and I were hiking on the trails at the Oregon Coast when we were kids, and we ended up picnicking right on top of a bees nest that was hidden in the leaf litter. There were bees EVERYWHERE, crawling on us and stinging us. We were wailing as we stumbled back to camp where our mother gave us Tylenol, made a paste from meat tenderizer and slathered it over all our welts, and then sent us to the family tent to sleep it off.

I was trying to be adult about all this atop the tower, so I put on a brave face, set up the camera and tripod and took deep breaths as I looked through my binoculars over the vast green canopy in search of birds. It was a good day. The sun was out, the sky was clear and there wasn’t any rain this morning, which was a nice break. And it was nice having a group of folks on the tower with us–more eyes on birds means we get luckier. Well, it was good except for the damn bees.

Here are some birds

In spite of the bees I soldiered on as I searched for birds with Steve, Beny and these other birders and tourists high above the trees. Birding in a tower is generally a rich and rewarding experience. The payoffs are great. You climb a tower to see the birds you can’t see from the forest floor and occassionally, you’ll get a close look. But often, the birds will be way out in the distance, which is fine, but there is much to see. It’s a different way of birding where you scan a large area, with light that is generally great, rather than in a small area with lousy light and limited sight distance under the canopy. Plus, you aren’t constantly craning your neck, looking for warblers. Birding atop a canopy is certainly easy on the neck. But those #$%@&! bees!

Lest you think I didn’t see any birds, here is some proof, albeit, these first in the series are not the best shots because some of these birds were way off in the distance. I was snapping photos with a Sigma 150-600mm lens and the photos are cropped in so you can get a somewhat closer look at the birds, which explains the crummy resolution and why the birds are still so itty bitty.

Right off the bat we got this Yellow-throated Toucan.

The Yellow-throated Toucan used to be called the Chestnut-mandibled Toucan.

But what is really spectacular is when you get to see this shot of bright blue waaaaaaaay off in the distance. This is the Blue Cotinga. It’s not just the pigment that causes the bright blue, but it’s the cellular structure of the feathers that collect light and reflect light. That’s why a Blue Continga shines like a beacon in the jungle forest. 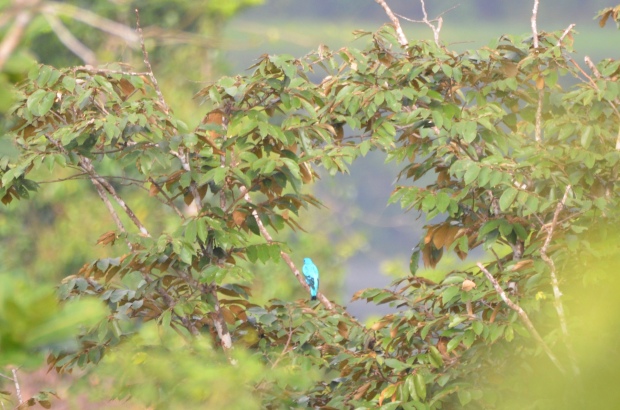 Speaking of Cotingas, did you know that the Purple-throated Fruitcrow is a member of the Cotinga family? 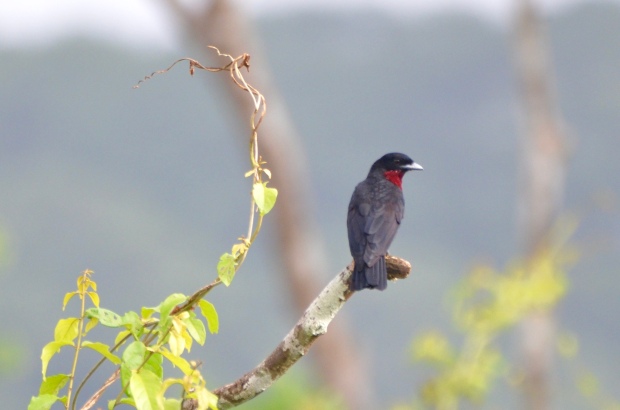 Do you see bees bothering Beny and Steve? Nope. I don’t see them either.

Finally, I couldn’t take any more of being adult about the bees. Turns out they were killer bees or Africanized bees and they were circling me more and more, and while I was trying to keep it together, tears started to well up in my eyes. “WHY ME?” I thought. “Why aren’t they swarming others?” (Not that I wanted others to be frustrated, but really, why me? I also seem to be the only one who mosquitos like, so there’s that.)

“Let’s put your jacket on,” Steve suggested. “We need to cover that shirt.” We grabbed my jacket out of our backpack and the bees continued to be all over me. I was putting my arm into one sleeve when I felt like I had run into a sewing needle. “Ack!” I said in a sort of loud whispery way, still trying to be compliant with the rules of being a quiet birder. (I think there might have been an expletive too.) “I’ve been stung,” I instructed Steve. “Get this off of me,” and I yanked my arm out of the sleeve. Seems as though a bee was caught in my sleeve.

Beny, our guide, came over and looked at the back of my arm and said, “You’ve got a stinger in you. Let me get it out.” And like the good guide and friend Beny is, he yanked out the stinger while bees continued to swarm me.

The sting in my arm wasn’t leaving and my attempts to remain adult-like were waning. One of the other birders on the tower with us offered me cream, which I applied and instantly, it took away the pain. I wish I could remember her name. She didn’t speak English, but Beny chatted with her and, like me, took a picture of the cream so he could get some of this “magic” cream and keep in his backpack too.

Fenergan Crema–the magical cream that took away the sting. If you can’t have meat tenderizer paste with you, this’ll do just fine.

I’ve had just about enough

Steve and Beny helped fan away the bees while I put my jacket back on and I did what all birders hate to do—I gave up. I felt a genuine panic attack about to happen so I told Steve and Beny that I was going to get off the tower—that I couldn’t take it any longer, but that they should stay. So, I descended the 174 steps and as I stopped at each platform interval, looking for birds, the bees returned. THEY WERE FOLLOWING ME! Ugh. I eventually made it down and as long as I was fanning myself and moving around, pacing the dusty trail at the bottom of the tower, I could manage to keep them at a distance.

On the bright side, I found this really cool thick, curly vine that reminded me of my curly hair.

The tropical forest sure has delightful surprises.

MY HAIR! That was it!

It wasn’t just my orange and coral shirt that was attracting the bees—It was my hair. I washed my hair that morning and used the little travel-sized shampoo my hair stylest back home gave me before we went on vacation. I remember her telling me that it was full of “natural floral and citrus aromas.”  Not only did I look like a flower, but I apparently smelled like something absolutely delightful. (Lesson learned: From now on I’m traveling with only fragrance-free hair products.)

After about 15 minutes, Steve and Beny came down and Steve tells me, “Once you left, all the bees were gone!”

“I know!” I explained. “They followed me down. I’m doomed today until I can wash my hair.” 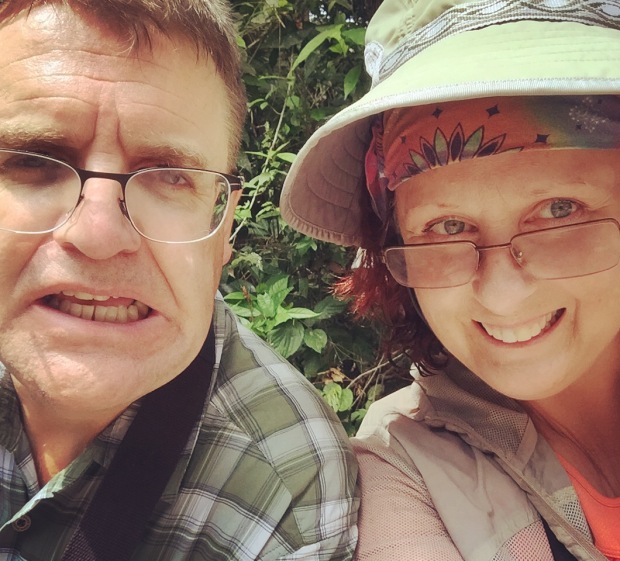 We stopped for a rest on a bench. That’s Steve trying to look sympathetic about my killer bee situation. That’s me trying to put on a brave face.

As luck would have it, an ant swarm

We started back on the trail, making our way to the Panama Rainforest Discovery Center where we were going to check out the hummingbird feeders and eventually have lunch, and as luck would have it, we stumbled upon an Army Ant swarm. This one wasn’t as big as the ant swarm we found on our first trip to Panama, but it was enough to produce some great birds for us.

We were so lucky to see this Great Tinamou

This is such a hard bird to find and it gave us great looks for quite awhile.

Okay, just one more picture. I can’t help myself. This was just such a great find.

White-whiskered Puffbird (female). This is one case where I find the female more striking than the male.

I was still fighting off the bees, which continued to be frustrating, but I was pleased to have an ant swarm and happy that I was only stung once. So the morning wasn’t too awful.

When I watched The Amazing Race last week with all the contestants racing through Pipeline Road and on the tower it brought back a mix of joy in seeing one of my favorite places and the panic about the bees, even in the comfort of my home while folding laundry in front of the TV. I’m definitely going back there and when I do, I’m going to have to be hosed down and wear only kahki.

So, bees are my nemesis. What’s yours? Is it snakes? (me)  Mosquitos? (also me) Children? (me again) Not knowing how to use your camera? (still me)   Please share your nemesis and frustrations in the comments below.

I know it makes it sound like I didn’t see a lot of birds, as I seemed to be preoccupied by the bees-attacking-me situation, but we did get a great list for the day. (Lifers in bold)

← Birding Pipeline Road. Again.
A bad day birding is better than a day at the office →

5 thoughts on “Birds and the Bees”