Let’s just start with the fact that I’m not very good about being in the cold. Not my fault, really. It’s just that my hands turn blue pretty quickly and that’s a big problem. But here I was on a boat on the Gulf of Mexico, all bundled up with a knitted beanie on my head, scarf tied around my neck, too many layers of tops that made me feel as bloated as I looked and gloves that were not really effective at protecting my sensitive fingers.

It was only 54°F, which isn’t really cold until you’re on a boat on the water at Aransas National Wildlife Refuge just outside of Corpus Christi, Texas. But it was all about the Whooping Cranes today and it would be the most important Lifer I was going to see. Ever. So, “buck up,” I told myself.

Back in the 1930s the numbers of Whooping Cranes had declined significantly as a result of over hunting and encroachment on their habitat—so much that there were only 15 in existence. Think of it this this way: I could easily fit 15 Whooping Cranes into my hotel room here as I write this post. That’s all there would be on the whole planet. Just those 15 cranes in this room.

Thankfully I don’t have to entertain the world’s population of Whooping Cranes in my room. For one, I don’t have a mini bar. Secondly, the considerable conservation efforts over the years have been able to increase to the flock that winters here in Texas to somewhere in the ballpark of 350. It’s fascinating to read about the efforts to keep this bird from extinction, including how volunteers would wear Whooping Crane costumes or hear the RadioLab podcast of this sad conundrum about what the trade offs are to help an endangered bird live.

A drive through the Aransas National Wildlife Refuge will only cost you a few bucks ($3/person or $5/car) and it’s worth it to stop by the Visitor’s Center to get a bird list, check the board for bird and mammal sightings and watch the little movie. (We always watch the movies, by the way.) There are easy hikes around the refuge where you can search for rails, spot alligators and even see Whooping Cranes if you’re lucky.

But the real opportunity to get to the cranes is via a boat charter. We took Rockport Birding and Kayak Adventures charter with about 28 other birders on the 1:00 tour. (There’s also a 7:30 a.m. tour for those who want to get up earlier.) The captain, Tommy Moore, is an experienced birder and was able to spot and I.D. every bird along the tour. He’s also sensitive to photographer’s needs and will stop the boat and even maneuver it so you can get the right light.

Now, of course I’ve seen Great Blue Herons before, but not as many as I had seen at one place in one afternoon. 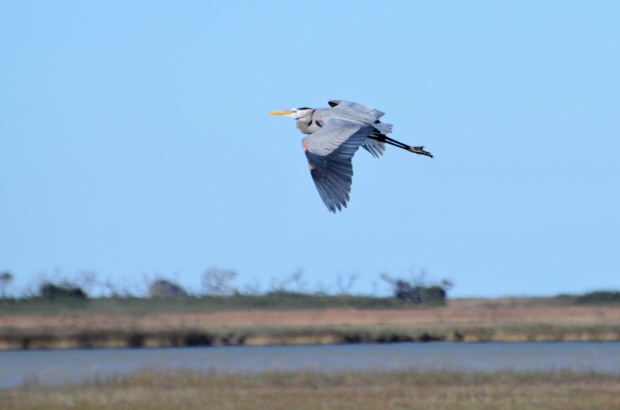 And spotting a Crested Caracara with its catch of the day was enough to get the whole boat excited enough to call it a day. 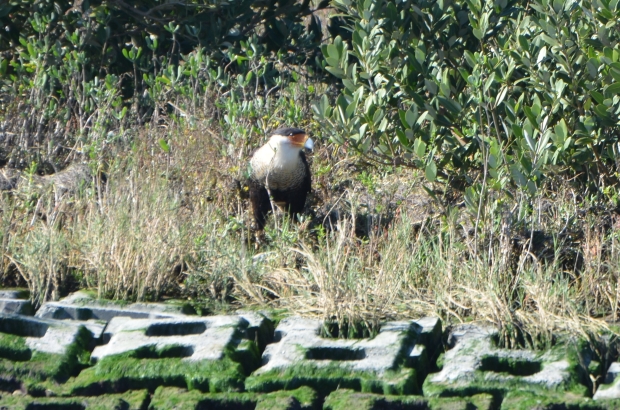 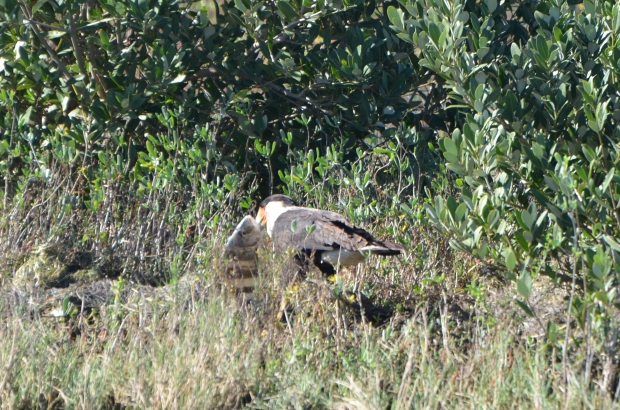 But of course it was the Whooping Crane I came to see. I took over 200 snaps of the handful of cranes we saw as I watched them go about their business in the grassy island of the Reserve. Their business was about fattening up, you see, with a diet of berries, crabs, fish, frogs, snakes, and pretty much anything they could catch. 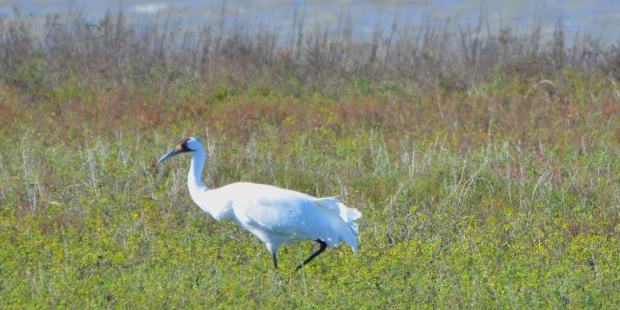 They’re larger than their cousins, the Sand Hill Cranes, by a good foot or so. You can see why a bird of that size was hunted to near extinction, as it fed a lot of people.

That red patch on the Whooping Crane’s head isn’t feathers, Tommy explained to us. It’s skin. And their feet are a pinkish red, which are hard to see if the cranes are wading around in the water.

These cranes came a long way from northern Alberta to get here in Texas, which is personally ironic, since our original plan was to live in Alberta, not Texas.

But Alberta is cold and Texas, for the most part, isn’t. It’s why I’m here and for this winter it’s why the Whooping Cranes are here.

The Whooping Cranes are here in Texas from November until the end of February. Book early for your boat charter, give yourself at least two days to wander around the park on foot and car. And be sure to bundle up on the boat ride.

One thought on “Looking for Whooping Cranes”