There’s nothing wrong with easy birding

The toughest days of birding were behind us on this Southwest Ecuador custom* birding trip. We suffered through the high elevation two days earlier and nearly passed out from heat exhaustion a day ago, so on this day we were refreshed from a dip in the pool and a good night’s rest at the Mantaraya Lodge

Plus, all the plantain chips and Coke Lite I could put into my body helped. I’m certain of it.

I could live on this diet for quite some time, I’m sure.

So I nearly gave José, our guide, a hug when he said, “Today we are taking it easy. We’re going to hike along a river in the Machalilla National Park and then later walk along the beach at Ayampe and see what we find there.”

A walk on the beach? Bless that man.

Machalilla National Park is a preserve near Puerto Lopez and includes beaches, cloud forest, and dry forest, as well as two islands, Salango and Isla de la Plata. The area has drawn tourists–both local and from abroad–and the impacts of tourism as well as over fishing and deforestation has had dismal impacts on the area. At one time, western Ecuador, claimed most of the tropical scrub desert and forest (25%) but now only 1%, can be found in the park.

Some birding days are tough. It could be the altitude, the weather conditions, the steep, muddy, slippery hikes, the long hours on your feet. or the bugs (followed by weeks of itching). I don’t mind those tough days. I’ve learned to hang back if I think I’m going to slow down the die hards or I just know it’s going to be too treacherous for me.  Or I just soldier through it, because nearly every time I surprise myself and do things I didn’t think I could do.

But then there are the lovely, easy days where you get to stroll on a fairly flat trail by a river and come upon a bird you’ve never seen before, like the Masked Water-Tyrant.

Or the dapper Great Antshrike, who we’ve seen before in Panama, but we got better looks at him here as he flitted around the branches.

And even though the Tropical Kingbird might seem a bit of a yawn for most birders because he’s seen practically everywhere, it’s always nice to be greeted by such a royal fella. 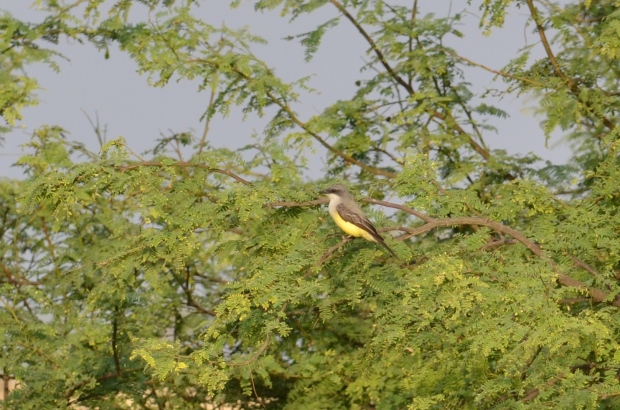 So, I’m not going to lie. I love those easy days.

During the walk on the beach at Ayampe I did get my first look—though at a distance—at the Blue-footed Booby in flight. It felt like such a tease, but I knew I would get good looks at more during our Galapagos adventure that was only a few days away.

Steve and I were more amused by the Ghost crabs, which were 2-3 inches in diameter You’d see them in the distance, but as you approached they would scurry into a hole–the whole beach was pock-marked with these holes. Having ticked Brown Pelicans, Magnificent Frigatebirds, Black-bellied Plover, American Oystercatcher and Whimbrel on the day’s list, we then turned our amusement toward the crabs. We were like a pair of 10-year-olds trying  to catch them with no success.

We ended the day again at Manataraya Lodge and spent the afternoon sharing the pool with the Brown-chested Martins and Grey-breasted Martins that were taking turns swooping around the pool and diving toward the water just enough to skim it with their beaks to steal a sip of water.

Sure, I’ll share my pool time with the birds.  After all, that’s why we were in Ecuador.

Not a bad place to end the day.

So, if you look at the previous day’s list (see previous post) we got roughly the same count. So tougher day versus easy day? Same, same.

* This was a custom trip we designed with Tropical Birding. We had a week on the mainland of Ecuador before we were to go on our Galapagos trip with National Geographic Expeditions and the nice folks at Tropical Birding helped us design a trip for us and arranged for the guide and driver.

8 thoughts on “There’s nothing wrong with easy birding”