Wishing it was a Rufous-winged Sparrow doesn’t count

I have only been birding for six years now and it didn’t take me long to figure out that identifying a bird is not an easy task, even among the more seasoned birders. Especially when it’s a sparrow. It’s like trying to tell the difference between the Kardashians. I couldn’t tell you who is Kourtney, Kim or Khloé. Or even Kris. (That’s the mom, right?) They all look the same and their behavior is the same. (Withholding “immature” comment here.)

Snarkiness aside, my point is that often the differences among birds of the same species are so subtle that were it not for my husband and a bevy of experts out there, I’d miss the differences right before me.  I’d think every sparrow was just a sparrow, genericizing it to the degree that it marginalizes each individual bird’s character, whether it be the coloring, the song, or even it’s behavior. In Corporate America we call that commoditizing: When your customer doesn’t recognize any difference between your product and the competitor’s. It’s what every business person wants to avoid. So I imagine it’s probably the same in the bird world. For heaven’s sake, I like to be recognized for my differences, why wouldn’t a sparrow?

Admittedly, my experience with correctly ID’ing a sparrow is limited. I can pretty much tell a White-crowned Sparrow from the rest. And a House Sparrow. (I know those guys too.) But the rest? That’s when I need an expert (read: husband). And a camera. That way, we can snap a photo so we can examine it, zoom in on it when we pull it up on the computer, and flip through our field guide to compare it. Yes, compare it to the gazillion other little sparrow guys who all look the same. I often feel like I’m looking at a police line up or police photo book. (Enter Law and Order music now.) 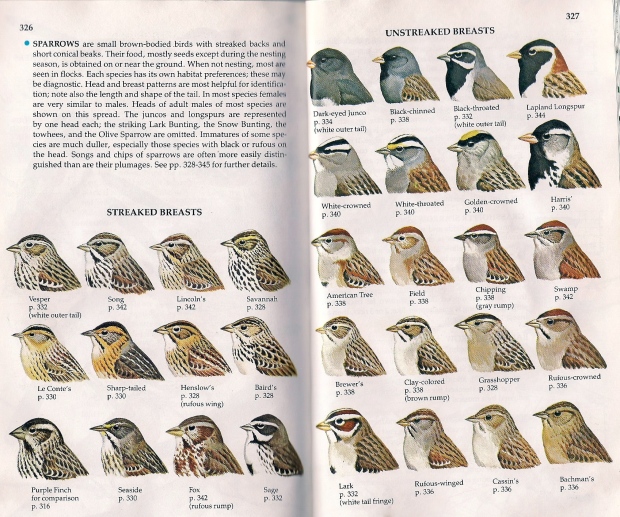 Trying to tell the difference among sparrows. (This is from our Golden Books “A Guide to Field Identification: Birds of North America” copyright 1983. It’s our favorite field guide–so compact.)

But alas, awesome little Golden Books field guide notwithstanding, while in Southeast Arizona a couple weeks ago we found the following guy and we were convinced it was a Rufous-winged Sparrow, which would have been a lifer for both of us. Wouldn’t that be awesome?

We wanted him to be the Rufous-winged Sparrow

Going throughout the day we were hoping he was the Rufous-winged Sparrow, but hadn’t fully committed to it. No sense committing yourself to something that just may not be so. I had a few other photos besides the one above but we were still puzzled even after pulling up the photo on my laptop back at the hotel and flipping back and forth in our field guide. Was he the Rufous-winged Sparrow or perhaps a Brewer’s Sparrow? An immature? Couldn’t tell.

So, I tweeted out the photo, posted it on Facebook and also sent an email to blogger Laurence Butler, who is from the area since folks from the area are often the best experts, as they have sharper eyes for the resident birds.  Here’s his responses:

I don’t think this is a Rufous-winged Sparrow since it lacks to two dark lateral throat stripes and the eyestripe on the Rufous-wing should also be rufous unless it’s a juvenile, but there wouldn’t be any juveniles this time of year and they’re much more mottled than this bird.
The thin black eye stripe, the bold, wide, white supercilium, and the single stripe on the throat, with the softer white malar stripes, point to non-breeding Chipping Sparrow for me. The other possibility, to my eyes, is a funky Clay-colored Sparrow, but they’re more buffy and have a wider eyestripe, as well as a more buffy supercilium.
I think Chipping in the best bet here, but of course it’d be good to cross-check this bird with other folks. Chippers have this really nasty habit of mixing in with other flocks too down there in the southeastern corner, when there are so many other Sparrows to already keep an eye on.

Thanks for the additional photos Lisa.

There’s a bit of buffiness on the sides of the bird’s face, but that dark, narrow eye stripe, prominent supercilium, and now more evident lack of dark malar stripes on the throat, plus the clean breast rule everything out but Chipping Sparrow. They’re buggers.

So there you have it.  I also received the same conclusion from Bill Thompson via Facebook. Which leads me to another question (and possibly another blog post): How the heck did people go birding before technology? The social aspect of birding is wonderful–the searching for birds while physically together (like when my husband and I ran into Bill Thompson in Panama while chasing army ants), but social media and electronic media (e.g, email) has truly brought birders together to help each other share stories and identify birds. I love, Love, LOVE it!
More on all that later, but here are more photos of (as Laurence puts it), the little bugger that I so wanted to be a Rufous-winged Sparrow. Next time I’ll get him.