I climbed out of the Zodiac onto the shore of the island of Genovesa and felt a little dizzy, trying to balance in the surf as countless Great Frigatebirds and Red-footed Boobies swirled above me in the sky over Darwin Bay. The flutter of bird activity wasn’t to catch thermals or to enjoy the breeze, but they were engaged in an epic battle in the sky.

Genovesa is aptly nick-named “Bird island,” and it is part of the archipelago that makes up the Galápagos Islands. It is there where you find Yellow–crowned Night Heron and Lava Herons, Red-footed Boobies, Nazca Boobies and also the nocturnal Swallow–tailed Gulls at the cliff’s edge. But the fight in the sky between frigatebirds and the boobies was the showstopper of the day. 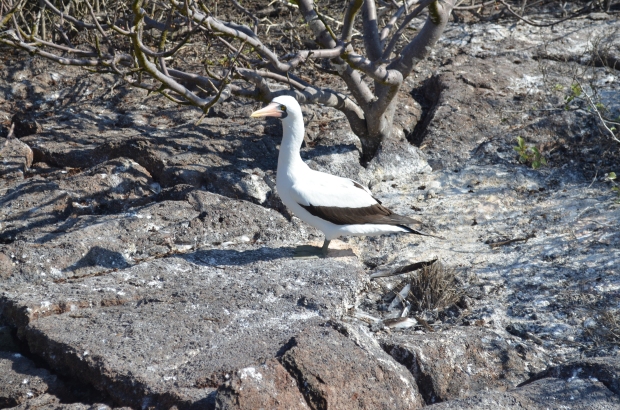 Once I got my bearings on the sandy coral beach I looked up to see the Red-footed Boobies doing their best to escape the frigatebirds, who were relentless theives, swooping in, up and around the boobies, catching them mid-air by their tail feathers and violently shaking them until they disgorged the fish they were carrying. The frigatebird would then catch the food before it hit the water. They did the same with nesting material. A Red-footed Booby carrying the perfect stick to take back to its nest was robbed midair when a frigatebird swooped in and stole it right out of its beak.

This large colony of Great Frigatebirds were also battling it out on land—not with the Boobies, but with each other. The males perched on prickly shrubs, with their wings outstretched and shook them as they inflated a large red gular sac, vibrating beneath their thin, long hooked beaks. The sac was large—bigger than a gallon of milk on the 3-pound bird—and the frigatebird called to the females by making a gobbling noise like a turkey. This was its mating ritual as the females circled above, looking for the most impressive male.

A woman from our group gasped, “They look like giant, inflamed testicles!”

I caught myself blushing, and then realized she said what probably the rest of us were thinking.

Our group split up and Steve and a few others followed their guide up steep, wooden steps—called the Prince Phillip steps—to see colonies of seabirds at a higher vantage point. I chose to follow our other guide in a walk on the horseshoe-shaped bay where it was flat and I could leisurely walk among the wildlife on the beach.

Frigatebird males sat in saltbushes while females circled high above them. The flying females pointed their beaks down, looking intently at the males, deciding which male was the best for them. There was a pair in the scraggly bush in front of me. He found his mate, but he continued to keep his gular sac inflated. She nestled next to him, satisfied with finding her mate—her companion. It was encouraging to find love among the chaos of the chatter, the gobbling, the vibrating. 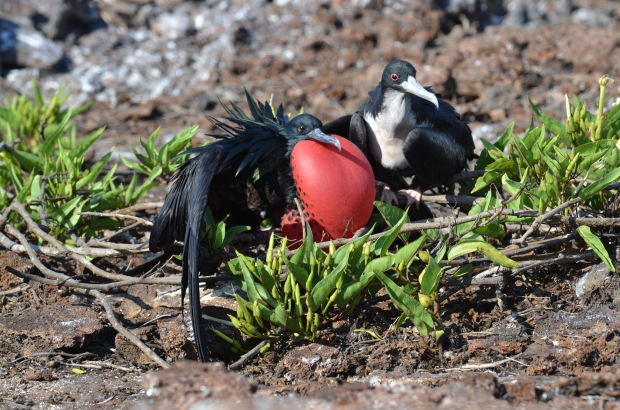 But just because you have a companion doesn’t mean others can’t try. There was an interloper. Another male swooped in and tried to wedge his way in between the couple. His sack was inflated, his wings spanned out and a fight broke out with beaks poking each others’ sac and I was worried one was going to puncture the other. Beaks knocked against beak like a sword fight.

In this remote world of mangroves and turquoise waters the competition among males to impress females is punctuated. Many years ago when I was in college I attended a party and two guys I actually liked a lot were both there. I’m pretty sure they each knew I liked them both, and their interest in me was only because they hated each other. Honestly? I didn’t care. I benefited by having a lot of attention that night as each took their turn in holding my hand and walking right in front of the other just to piss off the other person. I got the attention from both, but one tried harder and spent more time with me. I ended up letting him walk me back to my apartment that night. He felt like the winner and I would have felt like a winner for a short period, but it would be over twenty years later that I would eventually find my own mate.

On Genovesa, the interloping frigatebird won the battle and the female chose him. I stood there stunned and disappointed. This is not how it’s supposed to end up I thought. It’s not fair. The original male—the one who had the female first, stepped to the side and the air left his gular sac, becoming like a limp red balloon on its chest and I wondered if this is where we borrow the term, “deflated” when we bear disappointment.

A few days earlier we hiked to see the Waved Albatross—birds that mate for life—and were lucky enough to see them perform their mating rituals. Frigatebirds, though, don’t mate for life. They are only seasonally monogamous, which is not surprising, given how easily swayed the females appeared.

After a few hours our group circled back to where we started and met the other half of our group on the shore. I was happy to be reunited with Steve and he shared his excitement of seeing a huge nesting colony of Galápagos Petrels that were nesting in the crevices of the lava fields at the top of the island. I wished I could have seen that, but a trip to the Galápagos is always about choices.

It was time to go back and Steve took my hand to help me balance as we walked in the surf toward our Zodiac and I was pleased at my own choice in my mate. Though I was happy to meet these Great Frigatebirds up close, I preferred to live the life of the Waved Albatross.

3 thoughts on “Battle for love”