Miracles and the best auction I ever lost

I know I’ve been gone awhile. And I feel bad about leaving you all hanging about Steve’s prognosis at the end of that last post in July.

I’ll get right to it: Steve is okay. When he went in for his biopsy a couple of days after that blog post, they took another CT scan before they put him on the surgical table with all sorts of lines hooked up to him so the doctor could cut into his lung to get a biopsy. Then the doctor comes in and says, “Hmmm, whatever was on your lungs seems to have gone away, so you can go home. Nothing to do here today.”

So, we count ourselves among the lucky ones. And we’re big believers in miracles now.

The best auction I ever lost.

Last Spring I was at a local event for Austin Youth River Watch—a local non profit that provides peer mentoring to underserved youth in our community through intensive environmental education. I was there accepting an award on behalf of the company I work for. Austin Youth River Watch is an incredible organization. They help youth increase their understanding of science through the collection, analysis and publishing of water-quality data from Austin-area streams and rivers. The result is that they have a nearly-100% high school graduation rate of the youth involved in the program.

During the evening they had a live auction and I found myself bidding an an extraordinary opportunity to go on a private, small group birding field trip to our beloved, local Hornsby Bend, led by Victor Emanuel of VENT. There was the promise of a pancake breakfast too, but I was mostly excited about being able to bird along with Victor Emanuel.

I was the first to raise my paddle, and then there was another person who raised her paddle. It went back and forth between the two of us until we reached a point where I knew I couldn’t go any higher. We have an agreement in our home that for purchases over a certain amount that Steve and I should consult each other, but unfortunately, he wasn’t there with me at this event (he was in Calgary) and so I showed great restraint and kept my paddle down. The prize was won by the lady standing a few feet to my left.

After the auction ended she came to me and said, “Hey, give me your email and I’ll invite you on the field trip.” OF COURSE I gave her my card and I waited for the invitation.

A year had gone by and with everything we had been dealing with over the past year, I completely forgot until I received the email from her a month ago. The trip was on and I was invited as well as a +one!

We met at the headquarters of Austin Youth River Watch, which is an old 1-story home, probably about 1100 square feet, which has been converted into their command center. It’s right next to Hornsby Bend, which makes sense, as Hornsby Bend is where one of Austin’s Sewage Treatment plants is located.

It was dreary outside. We’ve been getting tons of rain for the past month, which we love to have in Texas, but it can make miserable weather for birding sometimes. So, we started with pancakes.

Victor came in and immediately made all of us feel  like we were important. As we sat and ate our pancakes he would ask each of us questions about our interests in birding and then he would weave tales of his own, which he had probably told many times over the years, yet he spoke with such excitement and his eyes would get big and would fill with light as though he was telling the story for the first time. He would always come back to saying, “But my favorite place to bird is along the Texas Gulf Coast.” You could tell that he loves it here in Texas. Yes, he was raised in Houston, and one might say, “of course, he loves Texas,” but if you know Texas and you know birds and how they migrate, it makes total sense.

Just as we were finishing off the last of the pancakes the rain had let up. We began our walk around the the Austin Youth River Watch property where Dickcissels were singing in the fields and Chimney Swifts were circling above.

Now, I have been birding since I met Steve in 2006, and by “birding,” that could mean a lot of things: From just simply being the tagalong with my pocket-sized Kodak camera and opera-sized binoculars to now hauling around a bigger lens and much better binoculars. For this day I told Steve I just wanted to focus on birding and using the binoculars rather than fussing with any camera. And I’m glad I did.

As we stood outside in what was now drizzle, Victor began explaining the basics of birding. Most of what he shared was what Steve had always shared with me over the past 11 years: Point to the bird, give a description and use the clock as a means of describing location. 12 o’clock is up, 3 o’clock to the right, etc. But what I learned most on this morning was how to “get on the bird” with my binoculars. Victor had us practice looking at a bird and how to hold our binoculars up to our eyes and not lose the bird in the process.

This is easier said than done, and even though I’ve been working with my binoculars for 11 years now, I still suck at it. Five years ago I confessed to Steve during one of our Panama trips that I didn’t even know how to use my binoculars, so he reviewed the basics with me and that made a world of difference, but I still have had trouble “getting on the bird.” 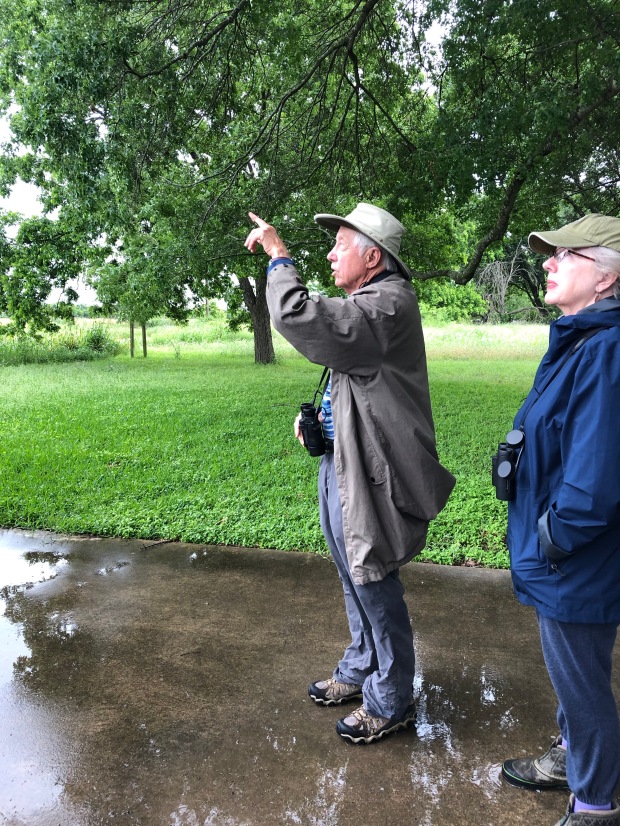 Guess what my problem has been along: I wasn’t holding the binoculars the right way. I’ve been holding them at a down angle all these years. Just by simply tipping the end of the binoculars up a bit, I was able to get right on that bird.

Wow. Something that simple has made all the difference.

We walked down the road a bit and then Victor suggested that we skip Hornsby Bend area and go to a place that he field in nearby Webberville that had been flooded by all the rain. According to Victor, eBird submissions had been reporting a Glossy Ibis and the are Hudsonian Godwit.

We climbed into one of the Austin Youth River Watch vans and headed toward Webberville. Andy, the organizer of the trip, drove and Victor sat in front as he looked out the window looking for the spot.

“STOP! Victor exclaimed. Turn around!” Andy found a place to turn around and we made our way to the gravel driveway leading to a farm. The gate was closed, but we had room to park the van and look out over the field where about 200 White-faced Ibis feeding. We didn’t see the Glossy Ibis, but we did see 14 Hudsonian Godwits in the field. That was a new one for me!

“It’s a bonanza!” Victor exclaimed as he held his binoculars to his face. Also, in the field were American Avocets, Whistling Ducks, Pectoral Sandpipers, Stilt Sandpiper, Spotted Sandpiper, some unidentified peeps, Lesser Yellowlegs, and both Long-billed and Short-bill Dowitchers.

Victor Emanuel getting a bird in the scope for us.

After 40 minutes at the flooded field, Victor checked his phone and exclaimed, “Warblers! There are warblers at Mills Pond! I’m going if anyone wants to follow along.” He got into the van, not waiting for any responses. He was ready to go.

That’s what you do when you’re with the expert birder. You obey.

We climbed into the van, returned it to Austin Youth River Watch and then we didn’t waste any time by getting into our own cars and following the I-35 North to Mills Pond in Wells Branch, a suburb of Austin where we met Victor who had already hooked up with his colleagues. The rain was beginning to come down again and while others in the group decided to call it a day, Steve and I birded along with Victor some more.

The rain worked in our favor. It was keeping the migrating warblers down, who also felt it was oppressive and not ideal migration conditions. The result was a bevy of warblers flitting around. Victor was keen on seeing a Canada Warbler. Here was this man who has seen tens of thousands of warblers in his lifetime, and I’m certain he has seen a Canada Warbler before, but his excitement in looking for it and the joy he had when he found it was as if he had seen it for the first time.

This is why finding birds is fun and even better when you see that joy in someone as seasoned as Victor.

Yes, this was the best auction I ever lost. 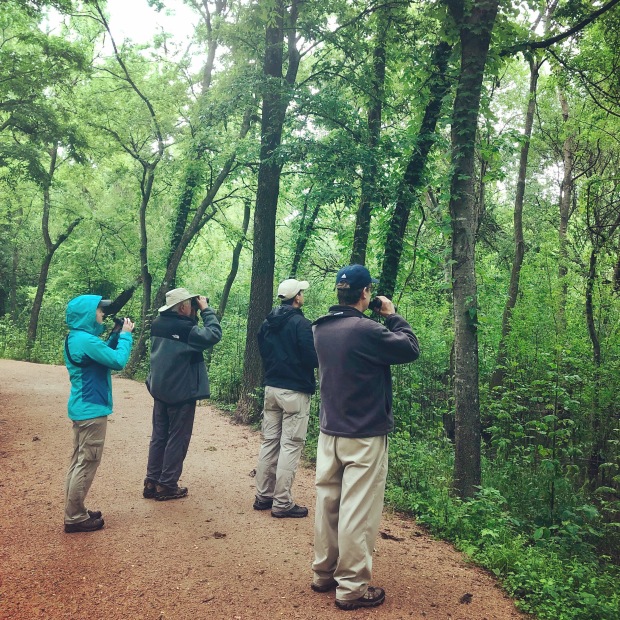 Birding at Mills Pond in Wells Branch, a suburb of Austin.

7 thoughts on “Miracles and the best auction I ever lost”