It was dark outside and eight of us were standing around in the office of Ecotours de Mexico in Puerto Vallarta waiting to get our instructions for the day. Paperwork had been signed and hands shaken accompanied with introductions. There were the four from Alaska, the guy from Utah, the man from Sweden and then there was Steve and me from Austin. Our tour leader, Fernando, told us where we were going and how the day would go: We were going to drive north, stop for some fresh pastries and then another stop at Oxxo—Mexico’s version of our 7-11—for some coffee and then head to Nayarit, the state to the north of Jalisco (where we were). Our first birding spot would be El Guamúchil.  From there we would decide where to go.

“Will we see a Trogon?” asked one of the women from Alaska. “We came down to see a Trogon.”

“We’ll have a good chance,” Fernando, answered. “But I can’t promise. We’ll hope for it, okay?”

He could see that his lack of guarantee worried them, so he added, “But we might. They’ve been seen there.”

I think to myself, Good luck. I can go whole trips in the tropics and not see one trogon.

We climbed into the white van and Fernando drove us through the darkness. The streets were empty except for vans and trucks making their morning deliveries. Steve immediately fell asleep to the rhythm and rocking of the van’s poor suspension. After our stops for pastry and coffee we headed up to the mountains as the light from the sun was beginning to fill the sky.

This was our second day in Puerto Vallarta and it was going to be a lot like the day before according to my weather app: Low cloud cover with cool mornings. The mountains, in particular, were cloaked with the clouds and the morning seemed as though there was a quiet battle between the sun and the clouds, with the clouds winning.

After an hour drive, Fernando pulled off to a dirt road, we spilled out of the van and I tried to get the circulation going in my legs. I felt like a newborn calf standing up for the first time as I was reminded, once again, of my 50 plus years.

We had a full sky of daylight, though the clouds did win. The long fingers of the palms pointed down, heavy as if sleeping. The dew of the morning had left its mark with little droplets of water at the end of each blade. Cecropia trees intermingled with fig trees all along the dirt road and there was so much green that I have come to the realization that there needs to be more words invented to describe green. A little stream of water trickles down the middle of the road, as though an artery of life. This place is alive, I thought. Should be a good day for birding.

There was squawking high above our heads. “Mexican Parrotlets,” Fernando pointed out.  I craned my neck back and looked up to the sky where the noise was coming. It was a flock of about 15 or so birds. I could only make out their little silhouettes, unable to see any colors as they flapped their way off into the distance chattering and squawking as they flew.

“So is this where we’re going to see the Trogon?” an Alaskan woman asked.

“I’m hoping we can,” Fernando answered. “They have been seen here.”

No promises, of course. That’s the caveat with all birding. Not all birders understand that, though. Target birds are always a great idea, but there’s a great difference between having a desire to see something so you can marvel in it and wanting to see a bird to tick off a list.

Once while in the Amazon in Ecuador, our guide told us over dinner that he was nervous about a group from Germany he was to lead the next week. “They emailed me a three page list of all the birds they expected to see. Most of them haven’t been seen in the area in a long time and are rare.”

“What happens if you don’t get them the birds they want to see?” I asked.

“They get really disappointed and frustrated and it makes for a bad trip,” he said.

Target birds are different than long lists of required birds for a tick. Target birds are something to hope for—to turn a trip or vacation into a quest where you don’t know how it will turn out in the end. I keep going back to Panama and every time I try to get a good a look at a Rufous-crested Coquette. I still have never seen one, yet it seems as if everyone else who goes there has seen it. Every time we go back our guide is just as excited as we are to try to find the Coquette even though he has obviously seen it before many times. It’s a “let’s do this together” experience and it turns into a lovely moment where someone who has had the experience before wants to share that with you so you can have the same feelings and the same thrill with seeing something extraordinary.

So these folks from Alaska had their hearts set on seeing a Trogon—their target bird for their trip—and we were all in on helping them with their quest. And if I’m truly honest, yes, I wanted to see a Trogon too. It wouldn’t be my first, but I don’t see them all the time and who would pass up a Trogon?

The first birds we got a good look at were a male and female Lineated Woodpecker, each on separate branches. I snapped a few shots and then a Streaked-back Oriole flew in to a nearby tree and while I fixed my binoculars on the Oriole I heard, “Hey, the woodpeckers are mating!”

A family of five Black-throated Magpie Jays swooped into a tree above our heads. They moved around quickly, bobbing their long magnificent tails as they hopped from branch to branch and from tree to tree.

It was getting busy in the branches and trees and soon, these Inca Doves appeared, warming up and posing on a wire.

And in a rare moment of stillness, I was able to capture a shot  (albeit, a rather crummy shot) of this Orange-cheeked Parakeet.

It got quiet again. I searched long horizontal branches—that’s where I was sure to find a Trogon. My eyes scanned, looking for a bright pop of color.

“Hey, over here! Trogon!” someone from our group called.

I grabbed my camera and tripod and made my way up a little ways on the dirt road. Fernando adjusted his scope pointing it to a tree in the distance. “Got it,” he said. “Anyone want a look?” Everyone was still fixed on finding it through their binoculars.

“Where is it?” someone asked.

“This tree,” another said, pointing into the green forest. “On a branch at about 9:00, just left of the trunk. See those dead leaves above?”

“Yeah, straight down from….”

There was a chorus of “got its” as we all looked at the red belly of the Elegant Trogon looking at us. 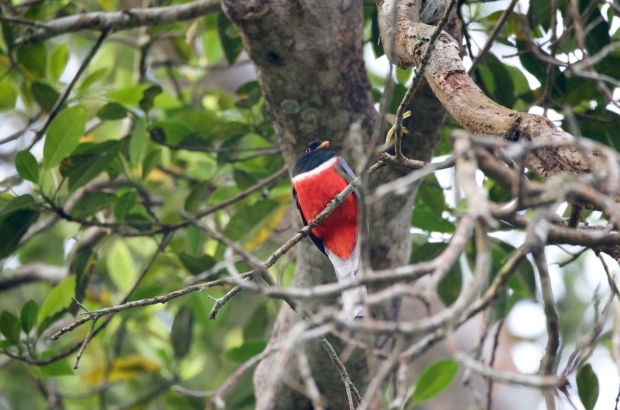 The group from Alaska was giddy, excited. High fives and smiles all around. They got their bird.

It was hard taking our eyes off the Trogon, with its puffed out red belly and black chest. It turned its head from side to side as it looked warily at us, and then someone said, “Hey, there’s another one!”

Yes, another Trogon two trees over on the left.

It was thrilling. Two trogons in one morning! All of a sudden I felt as though my chances at a casino would reap the same winnings.  I was feeling lucky and wondered if I could ever have this kind of luck in Las Vegas. Fernando was excited for our reward so early in the day, but he wanted us to keep moving. “Let’s go up the road a bit and see what else we can find,” he instructed. So, we climbed into the white van and moved on to the next area with Fernando navigating through what turned into a muddy road, windows down so he could hear for the birds..

A family of endemic Rufous-bellied Chacalacas were making a racket so Fernando stopped so we could get out and get good looks before they moved on. 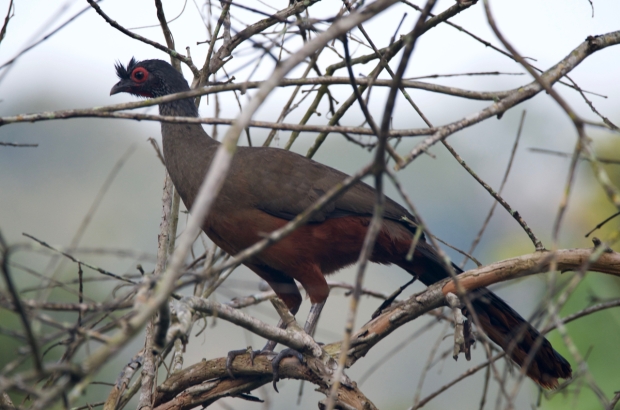 And then we saw another Trogon. I don’t recall who first spotted it, but this one got Fernando very excited. It was a Citreoline Trogon .

Wait, there were two–a pair of them in the area.

So that makes four—FOUR trogons.

We walked a little more on the road. The rains from the previous night had created puddles and miniature streams in the road. I carefully plotted out where I would put my feet as I hiked, so as not to slip.

We saw the Blue Mockingbird, Wilson’s Warbler, Golden Vireo, Orchard, Baltimore and Streak-baked Orioles, Black and White Warbler a Northern Beardless Tyrannulet and then out on the road—in the middle of the road—sat this Elegant Trogon.