Snow birding it for a weekend in Arizona

Of course, we knew it wasn’t the best time of year to go birding in Southeast Arizona. That would be during Spring migration, natch. But this is what it looks like in Salt Lake City (where I live) and it’s pretty much the same in Calgary (where Steve lives).

Ugh. Already tired of winter. And it’s only February.

Yes, we’re a long-distance intercontinental married couple who rendezvous monthly, and this time we decided to head south to escape the snow and get in a little birding—even if it isn’t high season for birding there—and see some of this:

Blue skies. Warm temperatures. No snow. Yes, I’ll have some.

First, a hat tip to Laurence Butler of Phoenix, Arizona who provided us loads of advice prior to our three-day trip. I met Laurence through my blog here (love his comments) and through both his blog and Birding Is Fun where he’s a regular contributor. It’s what I absolutely love about social media—it connects us all, and in my case, it connected us to an expert in the area. (Thanks Laurence! Your directions, details and tips were über helpful!)

So, here’s the trip we took. We flew into Phoenix and then headed southeast. Easy peasy.

That darn new camera and lens

Most people have a goal or target bird when they go on a birding trip. My goal was to start using my brand new camera (Nikon D7000) and new 200mm lens and new 2x teleconverter. That’s a lot of new for someone who is not a great photographer, as I’ve admitted before (and you’ve seen) on this site. I confess to shooting mostly on Auto (yes, I hear your gasps) and I know very little about light, except that I do know that shooting into the sun produces lousy results. My New Year’s Resolution this year is to get out of shooting on Auto and though this trip didn’t change that, I am determined to change my novice practices and start getting better results. I start yet another photography class next weekend.

Our first day out took us to the Sod Farms at the Santa Cruz Flats and it was a wonderful bird day, though a disappointing photography day. Our purpose was to find the Mountain Plover, which would be a lifer for me. Sod Farms, I must admit, are a first for me too. There we were, driving up and down big squares of sod fields looking for the Plovers. We had stopped so Steve could scan the area with his binoculars when a car pulled up and the usual birder exchange of “Seen any Plovers?” was tossed about. “No,” on both sides. The van drove on.

We stayed a few minutes longer and then another car pulled up. “Seen any Plovers?” I was beginning to sense this was going to be a bust at the sod farms today.  That car drove on too and we decided to move on as well.

As we turned around another big square of a sod field the people in the first car were pulled to the side with their scope out. Voila! Mountain Plovers! We found them, yes, but they were still quite a bit in the distance. Steve counted 62. Me? I got this lousy shot of a group of them.

A lousy shot of Mountain Plovers in the distance.

So far, I’m impressed with my new 200mm lens that just came out from Nikon—the optics are great—but not so impressed with the teleconverter. The 2x teleconverter produces crummy images at a distance, making it difficult to focus. This whole day was frustrating for me and I was wondering if I had just sunk a ton of money down the toilet. Or if it’s just plain user error. (The latter most likely.) I was beginning to think I could make my Twitterpal, @TheIneptBirder feel pretty good about himself.

The following day at Patagonia Lake State Park I had much better luck with the camera and lens. It was a beautiful day with 75° F temps and we were able to enjoy the warmth, the clear blue skies, and of course find some wonderful birds. Still struggling with the lens and its teleconverter, but doing much better with birds that are closer.

White-crowned Sparrow. If only he wasn’t hiding behind all those branches. 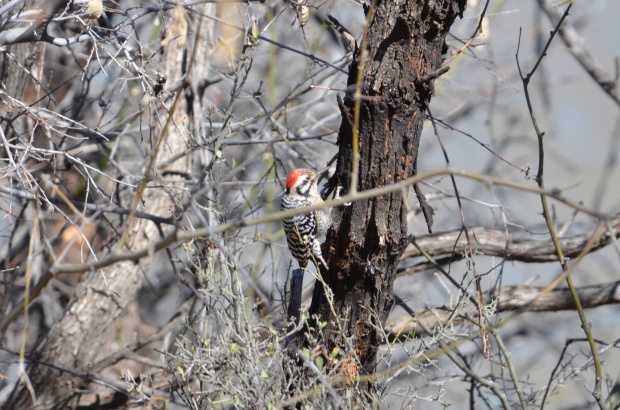 Bridled Titmouse–A lifer for both Steve and me!

I absolutely adored Patagonia Lake State Park. I loved all the big campers parked at their campsites right at the entrance. Several of them had bird feeders they put out themselves and I imagined that Steve and I could one day buy a camper and head on down to Patagonia Lake and hang out during the winter and just look for birds. And be old together. And have s’mores.

Next post will have more on our adventures in Southeast Arizona. Promise and cross my heart. There might even be better photos.

ps: I returned the 2x teleconverter and ordered a 1.7x, which from the reviews I’ve read online is much better.  Let’s just hope.

10 thoughts on “Snow birding it for a weekend in Arizona”