Oh little birds, why must you hide from me?

I’m into my fourth year of true “birding” and it’s taken awhile for me to really understand what a “rare bird” is, aside from someone just saying, “this is a rare bird.” I always got the whole concept, but until you know the significance of some of these rarities you don’t really understand.   And the more I go birding the more I understand that.

As my geologist husband always says: “Every rock tells a story.” And so does every bird.

In the Chiriqui Highlands of Panama, specifically in Cerro Punta, our first day of birding there produced this bird, the Golden-browed Chlorophonia: 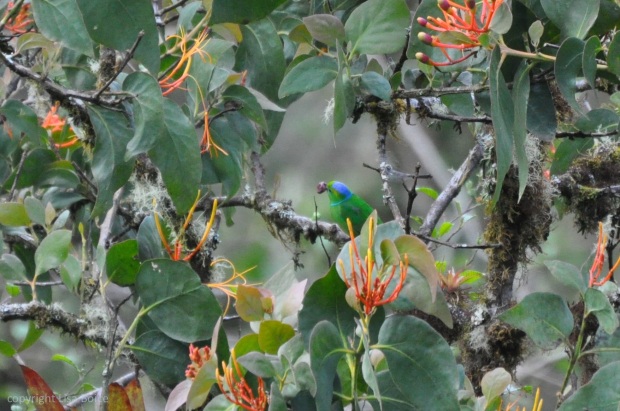 While the Golden-browed Chlorophonia isn’t technically rare it’s considered uncommon even though it’s a Panamanian endemic. Well, all of that (uncommon, endemic, bird, Panama) is enough to get me excited about seeing it and it certainly was enough for our quiet and gentle guide, Ito, to become animated about it. However, if Ito hadn’t pointed it out to us with his excitement, I would have just said, “Hey, look at that cute bird!”

As Steve and I were atop the tower at Pipeline Road (Part of the Panama Rainforest Discovery Center) our already-animated guide Beny Wilson became very excited when he spotted the Green Shrike Vireo who popped in quite close to us.  Not a rarity, exactly, but due to his coloring is often difficult to spot, making him the Where’s Waldo? of the jungle. 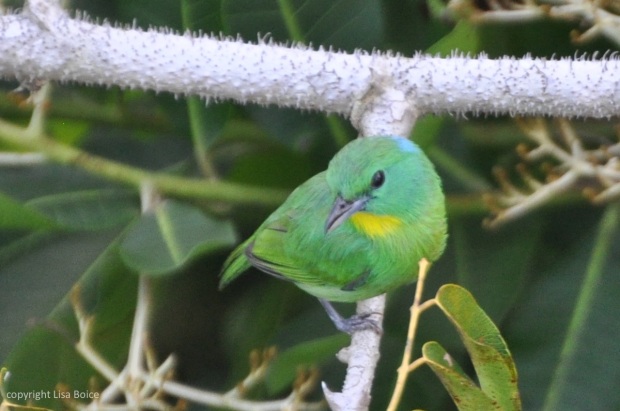 To give you a little perspective on how rare the Ochraceous Pewee is, this is what The Birds of Panama field guide shows:

Only those two small purple dots in the western Chiriqui region. Doesn’t give you much hope if you’re trying to chase this guy down, does it?  We were in the Cerro Punta area when this guy flew in just in front of us. (Now, why can’t all birds do this for me?) Here’s my shot of the guy: 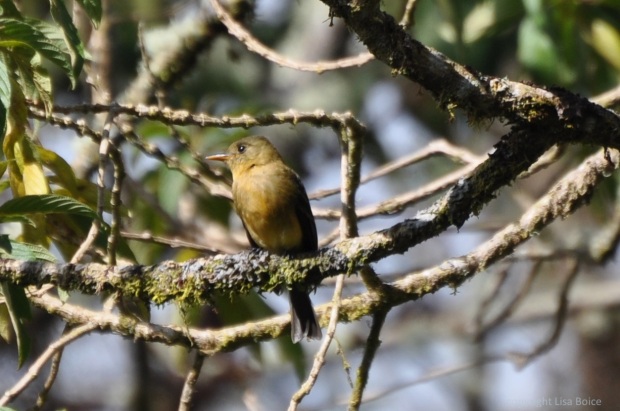 Our guide, Ito, was so excited about seeing this bird that I knew we had something.  I was just thrilled that I got a nice shot of it.

You know my feelings about hiring local guides–I love them and I’m thrilled to be putting my dollars into their economy rather than into international guides’ pockets.  But mostly, I know that when my local guides are over the moon at the site of a particular bird, especially since they hike these areas on a daily basis, I not only know that I’ve stumbled onto something wonderful, but that I come back home with a better appreciation for looking for the rarity, the uncommon or even the  bird who tries to hide from me in my own back yard.

By the way, Ito called in this bird to the Panama Rare Bird Alert and he was really excited to tell us the next morning before our next adventure and that everyone seemed to be buzzing about it. That put a huge smile on my face–our guide, Ito, was a local hero.

← Finding the Right Guide is No Accident: Interview with a Panamanian Bird Guide
A girl in pursuit of army ants. (Actually, I didn’t want to seem like a wimp.) →

7 thoughts on “Oh little birds, why must you hide from me?”